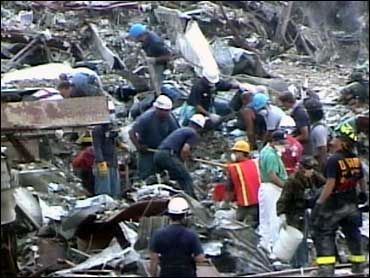 Democratic Sen. Barbara Boxer of California, in a wide-ranging discussion as she prepares to become chairwoman of the Environment and Public Works Committee next month, told The Associated Press that sick ground zero workers deserve long-term care.

"We are taking care of the families who lost loved ones and nobody complains about that," Boxer told the AP. "Why wouldn't we take care of the people who are surviving and coughing and sick — and dying, I might add — as a result of their work? To me it's clear, I don't have any hesitation about what our obligation is."

Boxer's declaration is a big boost to sick workers and New York lawmakers, including Clinton and New York Democratic Sen. Charles Schumer, who have badgered the Republican Congress and the Bush administration for years to do more for those who toiled on the toxic debris pile.

Read about Bonnie Giebfried, an ailing 9/11 EMT.
Read the story of Det. James Zadroga, whose death was the first confirmed casualty of ground zero exposure.

The soon-to-chairwoman also indicated she would follow Clinton's lead on the issue. In the new Democratic Senate, Clinton will chair a subcommittee under Boxer on environmental clean up issues.

"This is Hillary's domain, and I have told her I will be supporting everything that she and Chuck want to do," Boxer said.

Doctors found thousands of ground zero workers suffered a variety of ailments, principally lung and gastrointestinal disorders. The demands for treatment grew more urgent after the January death of 34-year-old former NYPD detective James Zadroga was blamed on his exposure at the site.

Clinton has estimated that each sick worker would need an average of about $5,800 a year in health care.

After Sept. 11, 2001, the government spent $90 million on health monitoring programs and this year spent an additional $75 million — the first federal dollars specifically for treatment. Health experts estimate that funding could run out in about a year.

"If you worked in a federally declared disaster area as a worker and you suffered harm," Boxer said, "you should have the help that you need in the immediate time to get well and then a follow-on through your whole life. It's no different really than putting yourself on the line in the military."

Boxer declared 9/11 health care "unfinished business," saying: "We definitely owe them the help to get well, yes, because they were down there because we were attacked."

Last September, just after the fifth anniversary of the attacks, Clinton offered an amendment on the Senate floor proposing a $2 billion program to provide health care for sick ground zero workers and lower Manhattan residents affected by the debris from the crushed remnants of the World Trade Center.

Boxer spoke in support of that legislation, chastising Republicans for praising first responders but not paying more for their care, saying on the Senate floor at the time: "Words are cheap."

A study of nearly 10,000 ground zero workers by Mount Sinai Medical Center in New York found most suffered some lung problems and many would remain sick the rest of their lives.