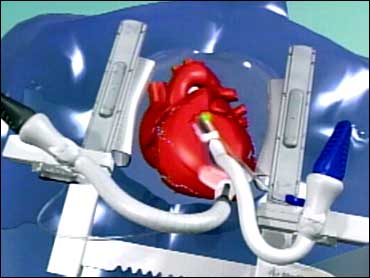 The vast majority of coronary bypass surgeries are done using a heart/lung machine -- a device that allows the heart to stop and keeps the body stabilized. But, a new study suggests the "off-pump" procedure may be just as effective and is less invasive.

Unlike the traditional method, where surgeries are done using a heart/lung machine that literally keeps the body alive, beating heart surgeries keep your heart pumping during surgery. The surgeon uses a heart positioner -- a suction device that safely moves the heart into a position to expose the arteries for bypass grafts. Then, with the help of another device, the heart is kept as still as possible -- allowing the surgeon to sew in bypass grafts and restore blood flow to the heart.

Researchers suggest the quality of the traditional bypass surgery and off-pump procedures are pretty much the same. Doctors concluded, after looking at one-year patient follow-up tests, that bypasses done with the beating heart method were just as durable as those done with the traditional method. Now, critics are saying more research still needs to be done using different classes of patients, different surgeons and multiple hospitals in order to determine whether these claims are true. The same surgeon performed all the procedures for this study.

Studies showed patients having the off-pump heart operation had lower levels of heart enzymes in their blood than patients who had the traditional operation, which suggests that they had less injury to their heart during the operation.

In other words, the off-pump operation was less stressful, less invasive on the heart than a conventional operation on the heart-lung machine. Researchers also found that patients who had beating heart surgery experienced less loss of blood. Also, those who got the off-pump procedure had a quicker recovery period, spending less time in intensive care, and they were able to leave the hospital on average one day earlier -- saving $2,300 for every patient.

Past studies, such as one in the New England Journal of Medicine, suggest that patients who received the beating heart procedure were more likely to experience clogging of the new arteries within just a few months.

Overall, the study found that off-pump surgery appears to be as safe as conventional bypass with a heart-lung machine. Senay says expect to see more studies on this subject. Differences of opinion will continue to surround this method.

Senay says the off-pump procedure is usually performed on patients who have other health problems and might be at higher risk if put on the heart-lung machine. But there doesn't seem to be any discrimination or pre-requisite for patients who need bypass surgery.

For this particular study, about 200 patients were chosen. Half selected at random were given the off-pump procedure, the other half received the traditional method. And the results showed that both methods had similar outcomes.