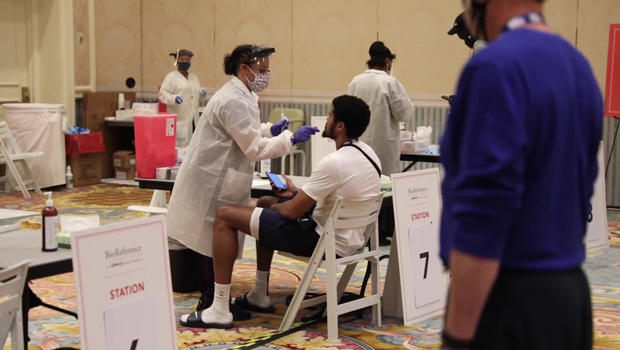 It's been a rollercoaster of a restart for the NBA. While the games are as exciting as ever, the weirdness that is the 2020 season is especially weird off the court.

It's not just the daily testing for COVID-19; as NBA players have shown through a blur of social media postings, the real challenge has been the isolation. More than 300 of the NBA's best, in addition to their coaches and staff, have been sealed inside the gates of Walt Disney World in Florida since early July.

And those who make it to the championship will still be living in this basketball bubble come mid-October.

"I feel completely safe here," he replied. "They've thought of everything."

Redick is a veteran of the NBA, but he's a rookie when it comes to practicing b-ball in a ballroom.  So is everybody here.

Cowan said, "You're sitting in isolation, in a state that's a hot spot, you're away from your kids, your wife – how do you put all of that aside, and try to win a game?"

"It's actually incredibly difficult to put it all aside," Redick replied. "I'm in my sixth week of not seeing my children, and I've never gone that long without seeing my kids or without seeing my wife. And that can really tug at your soul a little bit."

It is unprecedented, in both scale and cost. The deputy commissioner of the NBA, Mark Tatum, said that, to save the season, the league's lockdown was the only safe choice.

"There is no social distancing in basketball," Tatum said. "These players are playing near each other, close to each other, they're really breathing each other's air, and so the campus environment is something we had to do to keep them safe and keep them healthy."

For help in coming up with the health protocol, the NBA turned to esteemed virologist and AIDS researcher Dr. David Ho.

Cowan asked, "When they first came to you with this idea of trying to create this massive bubble, were you skeptical at first that it could work?"

"Well, I think no one should be so arrogant, to think that any plan will work," Dr. Ho replied. "We're in the first few minutes of this ballgame, so it's certainly no time to be complacent, or certainly not to celebrate."

Still, the mood inside the bubble is optimistic … mostly.

"To whoever made the decision that the Sixers had to practice at 9 a.m., you suck!"

Matisse Thybulle, with the Philadelphia 76ers, has tried to find the humor in it all, with his vlog, "Welcome to the Bubble," which has quite a following.

There are activities – this isn't Alcatraz, after all. The two biggest are golf and fishing, where there have been one too many fish tales for J.J. Redick: "These lakes are just stocked with fish. This doesn't seem like a very competitive environment between NBA players and the fish!"

Reddick figured for the sake of the fish, his free time in the bubble was better spent hosting his new podcast, "The Old Man & the Three."

So far the NBA's bubble is holding. And it's not the only one.

Tyler Perry Studios in Atlanta is hosting a 330-acre "production" bubble. Since early July, hundreds of cast and crew of shows like "Sistas" and "The Oval" have been locked in what they call Camp Quarantine.

Cowan asked Perry, "You lost a member of your crew to COVID pretty early on, I guess in April it was. So, this is really personal for you."

"Yeah, it's beyond personal," Perry said, "making sure that all of these people that are working for me, who are mostly brown and black people – we are at much higher risk of dying from COVID than any other group in the country. So, I didn't know any other way to do this other than just to be extreme about it."

Extreme, indeed. The plan called for on-site housing to be built, lots of it. It also included chartering planes to fly in actors in from other places, and keep them (after testing negative for COVID) in their own Tyler Perry-sized bubble.

How big an investment was it? "We're approaching $18 million by the time we get to the last show," Perry said. "So yeah, it added a little more than almost $5 million per show to the budget."

For the bubble to work, everyone has to buy into it, including social distancing and hand sanitizing. Perry said, "Absolutely. But I did have long conversations with them about understanding what the risks of what this is. Even though I'm taking every precaution, going above and beyond what any union or the state or the city has asked, they were like, 'Listen, we're in. We're gonna make this happen.'"

Since March, on a street in Alexandria, Va., three neighbors, and their collective family of five kids, have agreed to live their pandemic lives as one.

"This is our group and we're not going to go beyond that group," said Tara West.

"I remember it being really super-secret, you know? I have these two other families that I'm hanging out with and it was secret-secret," said Monica Kramer.

That is, until The Washington Post found out. Then, they actually became a model for other bubble broods.

"You have to know who you're with, and know that there's potential risk, but the benefits outweigh the risks," said West, who with Kramer and their neighbor Maria Magallanes have made it a requirement that their bubble have structure.

For example, they all share meals on some nights, but set aside family-only dinners on others.

They take field trips outside the bubble, too, usually to places where they can avoid bumping bubbles with anyone else.  Every precaution is taken, until they're safely back home.

"It's really fun just not to be, like, wearing a mask and be, like, six feet, all that baloney," said Nigel.

But that's not to say that bubble life is free of frustrations.

"We see each other EVERY SINGLE DAY!" they chanted, adding, "And we don't get along."

They're kidding, they do get along – they have to, and so do their parents. "We're all family now," said Jacob.

Maria Magallanes said, "I see Monica's kids and Tara's kids as my kids, and they see my kids as their kids, and so it's like we have three moms, three dads, and we're all on board and want the best for our kids, and that's why we have this bubble."

As for the NBA, its bubble is headed into the playoffs, but without the New Orleans Pelicans. The tough loss sent the team packing this past week. It's the first time in 13 seasons J.J. Redick won't be chasing a championship. That said, he did learn a thing or two while living life in this very big bubble – that it is possible to beat COVID at its own game:

"If this virus has shown us anything, it's that if we don't treat it with the respect that it deserves, it's only going to get worse – and it has gotten worse," he said. "Unless we get complete buy-in on some of these protocols, then this virus is going to be with us for a long time."