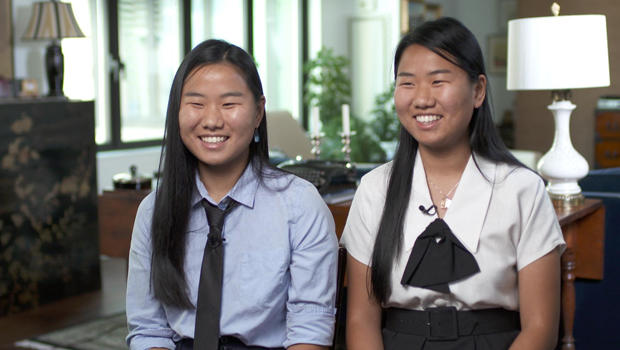 Identical twins are as close to being JUST ALIKE as genetics will allow. And for researchers, those similarities are providing very important insights. Here’s Erin Moriarty of “48 Hours”:

On a recent afternoon at London’s Heathrow Airport, 11-year-old Evie Hanlon-Moores stood impatiently alongside her mother. She was waiting for someone she hadn’t seen for nearly a year.

“Are you nervous at all?” Moriarty asked.

Despite the long separation she had no trouble recognizing her.

“You look more alike now even when we saw you in October!” said Jo Hanlen-Moores.

Evie Hanlon-Moores and Eva Chia are identical twins. But they live 10,000 miles apart.

Moriarty asked, “Isn’t this a very strange situation to explain to anyone?”

“It became our normal, didn’t it?” Jo replied. “A new kind of blended family.”

This unusual family saga began more than ten years ago in Brisbane, Australia. Dee Cridland had just brought her newly-adopted daughter, Eva, home from China when she saw what she thought were pictures of her child posted by another mother on a website for adoptive parents. “I thought it was my daughter,” Cridland said.

She immediately wrote the other mother, who lived near Bath, England.

“I opened my email, read the email from Dee, and just thought, ‘Oh!’” said Jo Hanlen-Moores, who had adopted her child, Evie, three months earlier. “It was exactly the same face.”

What both mothers suspected, a DNA test later confirmed; the fact that their parents gave the girls similar names is just an odd coincidence.

Evie and Eva are among more than 100,000 babies -- mostly girls -- abandoned since the late 1970s when China instituted its “one child per family” policy. With orphanages full, international adoptions were allowed in the early 1990s. But when demand for healthy Chinese babies outweighed the supply, siblings were separated. China has never had an official policy on the adoption of twins.

Moriarty asked, “Does that mean that there are probably other twins who’ve been separated at birth out there who just don’t that each other exist?”

“If twins occur in approximately one in 80 births naturally, then you have to figure, if hundreds of thousands of girls have been abandoned, there’s a fair number out there,” said Nancy Segal, a professor at Cal State-Fullerton, and director of the Twin Studies Center.

As many as 1,500 sets of twins -- both fraternal and identical -- by some estimates.

While the forced separation of all those twins is certainly heartbreaking, for Segal there is a silver lining: “It does give me an opportunity to track development in a very, very unique way.”

Such a large pool of twins raised apart offers researchers a rare chance to answer an age-old question: how much of who we are comes from nature, and how much from nurture?

“Studying twins tells us about all of us,” Segal said. “We can really hone in on the extent to which genes and environments play a role in different behaviors.”

Twenty-five-year-old Sarah Heath, adopted from China in 1992, grew up in Nashville, Tennessee.  She was a freshman at Georgetown when a classmate called her by the wrong name. “This guy came up to me and thought I was someone else,” Heath recalled.

But he did really recognize her. It just wasn’t Sarah.

He sent a picture of Sarah to Celena Kopinski, a girl he had grown up with in New York City who was now going to college in Ohio.

“Did you think that the girl in that picture looked like you?” Moriarty asked.

“If I didn’t know that I didn’t own those clothes, I would think that was me,” said Kopinski.

Because of several missed connections on social media, it took nearly four years before Celena and Sarah finally agreed to meet for a rather awkward dinner.

“We kind of always joke how our relationship comes off like a weird blind date,” Heath said.

“Normally when you meet someone for dinner, if you don’t know them, you probably tell them, like, what you are wearing or something,” Kopinski said. “But in this case, it was sort of like, ‘Well, look for the person that looks like you!’”

A DNA test confirmed they are identical, and they recently became the 18th set of twins adopted from China to enter into Segal’s twins study.

Moriarty asked, “I’m curious, are you looking for the similarities, or do you see the differences?”

“I think there’s a little bit of both,” Kopinski said. “You feel self-conscious. You’re like, ‘Wait, like, is that what I look like when I east pasta? Do I laugh like that? Do I drink water like that? It is kind of like looking in a mirror, except there is no mirror!”

After two years, they’re still getting to know each other, although some similarities are already apparent: They both really like food, and they share a similar fashion sense.

Seventeen-year-old Lily MacLeod lives four hours away from her identical twin sister, Gillian Shaw. (“I’m thankful for the little visits,” Lily said.) But neither girl remembers a time when they didn’t know they were sisters.

Neither one thinks they look that much alike. One is left-handed, the other right-handed. (“We’re mirror image twins.” “Yeah, I part my hair this way. She parts it that way.”)

Gillian is growing up in Windsor, Canada with an older brother and sister. Lily, an only child, lives outside Toronto.

For 16 years, the families have taken turns making the long drive between their homes.

Lily’s parents, Kirk and Allyson, and Gillian’s parents, Mike and Lynette, met in China in 2000 when they were adopting the girls. They noticed the babies looked so much alike, that they ordered DNA tests when they got back to Canada.

“We always say we got a baby, and we also got an extended family, ‘cause they are like family for us,” Lynette Shaw said.

Both couples believe the orphanage suspected the girls were twins and did what they could.

“This orphanage put these little girls together knowing that both these girls were going to the same group in Ontario,” said Kirk MacLeod.

“You don’t think that was by coincidence?” Moriarty asked.

“Do you think they have a true special bond that’s unusual?”

“I think Lily would say that having Gillian in her life is probably the most important relationship she has,” Allyson said.

That brings us back to Eva’s mom from Australia, Dee Cridland. She understood just how important that sibling relationship is, and was so troubled when she first learned of her daughter’s separation from her sister that she considered giving up Eva, so she could grow up with Evie in England.

“At the time, I would have done just the right thing by a child to let her live with her sibling,” said an emotional Cridland. “But now I couldn’t imagine living without her.”

Instead, Dee and Jo made a promise to keep the girls in contact. They met for the first time at three-and-a-half years old. And when Moriarty met them, it was just the fourth time that the girls had been together.

And yet there’s no question in Eva’s mind about just how similar they are: “We’re basically the same person.”

Nancy Segal said, “We find with twins raised apart, they are as alike in personality as twins raised together. And I know that sounds counterintuitive. But what it means is that the similarity among people living together is due to shared genes, not shared environments.”

And Segal says twins raised apart may only become more alike in time. Why is that? “It’s because they have the chance to gravitate towards environments and experiences apart from what their parents want,” Segal said.

But for right now, these parents are offering the right kind of nurture -- to allow nature to take its course.

“I have always thought that nature was the stronger of nature and nurture,” said Jo Hanlen-Moores. “Bbut I had no idea until I saw them. The things like the laugh, and the run and the mannerisms, and the words they choose. It’s unbelievable, the things you inherit. It made me rethink everybody!”

Chef José Andrés on serving meals in a war zone