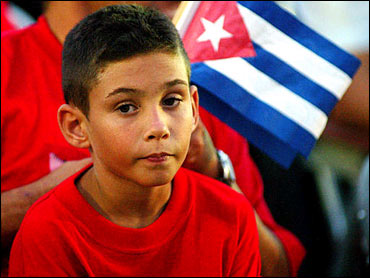 A federal judge ruled against awarding damages to 13 people who were tear-gassed by immigration agents during the raid to seize 6-year-old Elian Gonzalez in April 2000.

U.S. District Judge K. Michael Moore issued a 19-page decision Friday saying that the demonstrators and bystanders failed to show enough credible evidence that federal officers' use of force during the raid was "unreasonable under the circumstances."

The 13 people had sued the government for $3.25 million, claiming they had lingering injuries after they were sprayed at close range while on their own property or behind barricades. Three neighbors testified that an agent gassed them without warning from 2 to 4 feet away as they stood alone in their fenced front yards.

But the judge agreed with the government's argument that officers did not use excessive force and that the plaintiffs failed to show that they were sprayed at close range. The April 22, 2000, raid led to the boy's eventual return to Cuba with his father.

Attorneys for the plaintiffs said they planned to appeal. A spokesman for the U.S. Attorney's Office in Miami declined comment.

Elian was rescued from the Atlantic Ocean on Thanksgiving Day 1999 after a shipwreck killed his mother and others trying to reach Florida by boat. The then-Immigration and Naturalization Service turned him over to relatives in Miami, who balked when the government decided he should go back to Cuba.

During the six-day, non-jury trial in January, Justice Department attorneys argued that the tear-gassing of bystanders was "an unavoidable consequence" in the frantic raid in a densely populated neighborhood that had been the center of the heated custody battle.

Judicial Watch attorney Michael Hurley called the gassing "an overreaction" and argued that agents went beyond the raid plan, which called for the use of gas only after an order was given to repel "a mass breach" of demonstrators at a barricade. He said no order was given, and there was no major breach.

A January pre-trial ruling said that the use of gas during the raid was reasonable and allowed under Florida law. Originally 96 people filed suit, but only 13 plaintiffs' claims for assault and battery and emotional distress remained.

To mark the raid's five-year anniversary, Elian, now 11, read a speech at a televised event in Havana. Castro was among thousands in the audience.