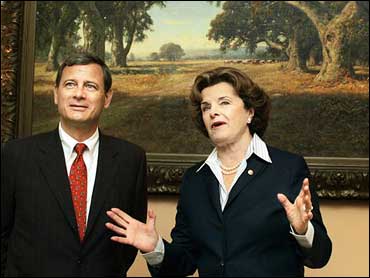 In response to a lengthy questionnaire given him by the Judiciary Committee, Roberts pledged to respect established rulings if confirmed to the Supreme Court, saying judges must recognize that their role is "not to solve society's problems."

The questionnaire, nearly 100 pages long, provides Roberts' responses to a broad array of questions, including his work history, political ties and views on judicial activism.

The Judiciary Committee also revealed that Roberts is worth $6 million. The 83-page document released Tuesday shows Roberts' home in the fashionable Washington suburb of Chevy Chase, Md., is worth $1.3 million. His investment portfolio includes $291,200 in XM Satellite Radio, $264,000 in Dell computers and $106,553 in Texas Instruments.

Roberts earned in excess of $1 million a year with the Washington law firm of Hogan & Hartson, where he was a partner. He then left for a seat on the U.S. Court of Appeals for the D.C. Circuit and a salary of $171,800.

Also, documents released Tuesday by the National Archives showed that Roberts, as a government lawyer in the 1980s, helped coordinate efforts aimed at rebutting criticism that the Reagan administration Justice Department was hostile to civil rights.

"Precedent plays an important role in promoting the stability of the legal system," Roberts answered the questionnaire. "A sound judicial philosophy should reflect recognition of the fact that the judge operates within a system of rules developed over the years by other judges equally striving to live up to the judicial oath."

At the same time, the former Republican attorney said that "judges must be constantly aware that their role, while important, is limited."

"They do not have a commission to solve society's problems, as they see them, but simply to decide cases before them according to the rule of law," Roberts stated.

His views on precedents are considered critical to gauging his position on overturning the 1973 landmark Roe v. Wade abortion decision, a stance supported by at least three conservative members on the court.

Roberts also writes that he does not recall ever being a member of the conservative Federalist Society, despite participating in events including a 1993 panel and a luncheon speech to the legal group in 2003.

"According to recent press reports, in 1997 I was listed in brochures as a member of the Washington Lawyers Steering Committee," Roberts wrote. "I have no recollection of serving on that committee, or being a member of the society."

With regard to his Reagan administration days, the Supreme Court nominee was just 26 when he began serving as special assistant to Attorney General William French Smith in 1981. The 350 pages of documents from the National Archives show a confident attorney who sought to calm critics and promote the department's conservative agenda.

In a Sept. 15, 1982, memo, Roberts offered guidance to Smith in advance of a meeting with Clarence Pendleton, Reagan's newly appointed chairman of the Civil Rights Commission.

"If Pendleton brings it up, you should indicate that you favor increased dialogue and have met with many civil rights leaders yourself, but do not commit to supporting a 'summit,"' Roberts wrote.

As to the department's Title IX decision, Roberts counseled Smith to say that the lower court's restrictions were persuasive but emphasize "you did not participate in the case because of your University of California ties."

The documents, posted on the National Archives' Web site, come as Senate Democrats are seeking release of thousands of pages of records from when Roberts served as a top deputy in the solicitor general's office from October 1989 to January 1993.

The White House already has released thousands of pages of documents from Roberts' tenure in the White House counsel's office in the mid-1980s, as well as his files when working under Smith. The additional 350 pages were materials the Archives subsequently found in Smith's files that pertained to Roberts.

"We continue to bring actions to guard against impermissible discrimination. The average citizen, however, is no longer burdened by intrusive remedies," Roberts wrote on May 6, 1982. "We no longer demand busing, so disruptive to the education of our children, or quotas, which have been so divisive in the work force."

Though little of Roberts' view on abortion can be gleaned from the documents, in a Dec. 11, 1981, memo to the attorney general, Roberts noted that former Harvard law dean Erwin Griswold had given a recent speech that was consistent with Smith's "policymaking themes" which criticized the Roe v. Wade decision legalizing abortion.

Griswold "devotes a section to the so-called 'right to privacy,' arguing as we have that such an amorphous right is not to be found in the Constitution. He specifically criticizes Roe v. Wade," Roberts wrote.

"You were quite right that I would find a 'measure of resonance' in your lecture," Roberts later drafted in a letter to Griswold signed by Smith.

Detailing his political ties, Roberts wrote that he spent about a week assisting Florida Gov. Jeb Bush during the disputed presidential election count in 2000.

He said he went to Florida at the request of GOP lawyers, assisting an attorney who was preparing arguments for the Florida Supreme Court and at one point meeting the governor, President Bush's younger brother, to discuss the legal issues "in a general way."

"My recollection is that I stayed less than one week," Roberts wrote.

Other political affiliations Roberts listed were the executive committee of the D.C. Lawyers for Bush-Quayle in 1988, Lawyers for Bush-Cheney and the Republican National Lawyers Association.