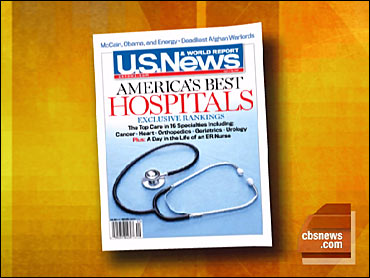 The United States Census says there are more than 7,500 hospitals nationwide. The Early Show had the results Friday of U.S. News and World Report's 18th edition ranking of the best of them.

This year, Johns Hopkins was on top.

CBS News correspondent Bianca Solorzano reports that, for more than a century, Johns Hopkins has consistently offered top-notch medical care and been recognized as an industry leader.

"We have scientists from a wide variety of disciplines collected under one roof," says Hopkins' Dr. Stephen Desiderio.

As a research hospital, Hopkins is responsible for some of the most important discoveries of our time. Hopkins' doctors pioneered the use of rubber gloves in 1889 and were among the first to isolate and cultivate human embryonic stem cells. Today, its scientists are working on prosthetic hands that respond to thoughts.

"A lot of the research that I've done in my career has really come straight out of either issues my patients have raised with me or issues that I've noticed with speaking with them," says Dr. Sherita Golden.

With over 1,000 beds, Hopkins is a sprawling hospital, but there's an intense focus on patients' individual needs.

"One of our biggest claims to fame is innovation." say Dr. Julie Freischlag, the first woman chair of surgery in Johns Hopkins history. "Innovation in how we take care of patients, how we look at who should be taking care of you."


To see U.S. News & World Report's comprehensive coverage on this, click here.
Not everyone will be able to get their medical treatment at one of these sites, but Avery Comarow, a health writer and the editor of the Best Hospitals issue, suggests some questions to CBS News Early Show anchor Maggie Rodriguez that patients can ask their doctor to make sure they're getting the best care possible.

"Ask that doctor how many patients like you he or she has seen in the last year," said Comarow. "For something like bypass surgery, it should be at least 250 a year. ... For something that's very difficult like pancreatic cancer resection, it can be as few as ten a year."

Comarow also suggesst that patients ask what the death rate at a hospital is for patients receiving the same treatment, and what quality of life they should expect to have following their treatment.