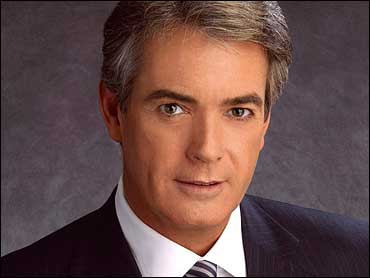 John Roberts has been CBS News' Chief White House Correspondent since August 1999. He became the anchor for the CBS Evening News Sunday edition in March 1995 and has served as a substitute anchor on Face The Nation.

Before that, Roberts was a New York-based correspondent, contributing reports on medical and health issues, as well as a wide variety of other subjects, primarily to the CBS Evening News With Dan Rather. He also served as anchor of the CBS Evening News Saturday edition from February 1999 until being assigned the White House post.

Roberts has anchored live CBS News coverage and reported on-site from many major breaking stories in the past several years. He was one of the Network's embedded correspondents during the war with Iraq, reporting from the frontlines in one of CBS News' specially equipped "mobile studios" which enabled Roberts to transmit live reports while the military unit with which he was embedded as it moved through the Iraq landscape. He has also covered the Atlanta Olympics bombing; the Oklahoma City bombing; the Northridge earthquake; the kidnap and murder of tourists in Uganda; Hurricanes Hugo, Andrew, Fran, Felix, Georges and others domestically, and Hurricane Mitch in Honduras; the U.S. intervention in Haiti; the Cuban refugee crisis in Miami and the fire at the Branch Davidian compound near Waco, Texas.

His work has been recognized with three national Emmy Awards: for coverage of the Atlanta Olympic bombing, the death of Princess Diana and the TWA crash.

Between his two CBS News assignments, Roberts was co-anchor for the 5:00 and 11:00 PM newscasts on WCBS-TV, the CBS Owned station in New York (1994-95). While there, he anchored live coverage of the 1994 elections and the New York City subway firebombing. He won an Emmy Award for best newscast and a New York Press Club award for his coverage of the latter story.

Prior to joining CBS News, Roberts had been co-anchor of "Canada A.M," CTV's top-rated morning news program (1990-92) and an anchor/correspondent at WCIX-TV (now WFOR-TV), the CBS Owned station in Miami (1989-90). He also served as an anchor and correspondent for several broadcasts of City TV in Toronto (1979-89).

Roberts was born in Toronto. He attended the University of Toronto.