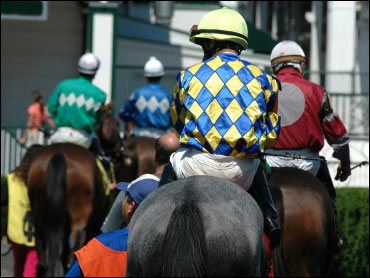 Victor Molina will accept whatever punishment he gets for kicking a horse in the stomach. The veteran jockey can only hope everyone who saw his disturbing act can accept his apology and let him get back to doing what he loves best.

Molina wants back in the saddle after his disciplinary hearing Friday for his swift kick to a colt's belly that left him suspended and stained what was a virtually unblemished reputation molded over a 27-year racing career.

That may be harder than winning the Triple Crown.

Molina has heard the knee-jerk criticism — that he's a monster and that he's cruel to animals and should never be allowed back on a horse.

"I'm not the kind of person that people are making me out to be," Molina said on Wednesday.

Molina is in trouble because he kicked the 2-year-old colt Yes Yes Oh Yes in the stomach before a race Monday at Philadelphia Park. Molina said the feisty horse flipped in the starting gate and his head struck the jockey flush in the chest.

Molina's chest went numb and he lost his cool. He removed the saddle from the horse and punted Yes Yes Oh Yes' belly.

"The threat of knowing the horse could hurt you, if anything, got me upset," he said. "The idea that I could have got hurt, I just got mad at him. Maybe that's why I kicked him."

And it was all caught on tape.

The race was being simulcast to tracks around the country and was live on racing channel TVG, so there was no hiding, no cover-up, no excuses. Horrified fans who saw the act called the track and complained.

Racing director Sal Sinatra ejected Molina from the park and suspended him indefinitely. Molina will have a hearing Friday before the track's stewards.

"My chest still hurts, but that's not what hurts me most right now," he said. "It's what happened to my reputation. My record is clean and it speaks for itself."

The 46-year-old Molina, who's been racing at Philadelphia Park since 1988, was known as a hardworking jockey who worked on horse welfare causes and was respectful toward his peers. That's what made this incident so puzzling to those who know him.

"It's very odd that he acted that way," Sinatra said. "My opinion is that he probably hurt himself more than the horse. It's probably not the brightest thing. I think he was extremely hurt and embarrassed when he was in my office. He knows he's going to get a penalty."

Molina hoped the penalty was no more than a fine. He's apologized to the owners, track officials and anyone else who would listen.

"When they hear all the facts, I hope they'll realize it's a mistake," he said. "It's something I regret. It's not something I would do again."