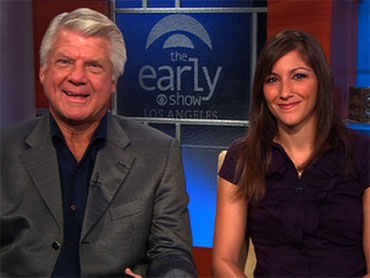 The former Dallas Cowboys and Miami Dolphins head coach and network NFL commentator told "Early Show" co-anchor Erica Hill the show's doctors discovered that he had two blocked arteries during the second of his two previous tries to make the "Survivor " cast. That cost him his spot on the show at the time, Johnson said, but, " 'Survivor may have helped me survive." '

That's because he then had stents put into the arteries, which were totally and 70 percent obstructed, went on a strict workout regimen, lost 30 pounds and lowered his cholesterol from 220 to under 100.

The third time wound up being a charm for Johnson, who finally made the "Survivor" cut and is a competitor in the show's latest edition, in its 21st season, "Survivor: Nicaragua."

He and a rival from the other tribe, Kelly Bruno, an award-winning "Ironman" tri-athlete who happens to be an amputee, discussed "Survivor: Nicaragua" with Hill and the twist that shapes the show the time: young vs. old tribes.

Johnson joked that he was upset about it, because he'd been counting on younger tribe-mates to help him through.

Bruno, a medical student, said both tribes had experience and energy, so the young-vs.-old lines got a bit blurred during the actual competition.