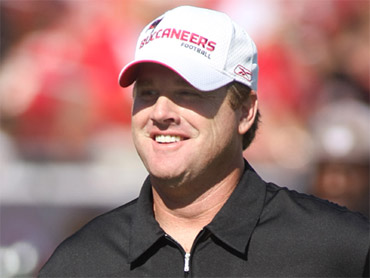 The 43-year-old Gruden is the younger brother of former NFL coach Jon Gruden. He was an assistant for seven years with the Tampa Bay Buccaneers, including for his brother's 2002 season Super Bowl champions. Jay Gruden played and coached in the Arena Football League for 18 seasons.

Coach Marvin Lewis said Thursday that Gruden will help bring energy and an attacking style to the offense. The Tiffin, Ohio, native played quarterback for four seasons at Louisville and last year coached the Florida Tuskers of the United Football League.

Meanwhile, the Kansas City Chiefs have elevated offensive line coach Bill Muir to offensive coordinator, where he takes over for the departed Charlie Weis.

Weis announced before Kansas City's final regular season game that he was leaving to become offensive coordinator at the University of Florida.

Muir is beginning his 34th season in the NFL and has served as both offensive and defensive coordinator. He was offensive line coach from 1995 through 2001 for the New York Jets, where he was part of the coaching staff with current Chiefs head coach Todd Haley.

Prior to coming to Kansas City in 2009, Muir was offensive coordinator for seven seasons with Tampa Bay, including in 2003 when Buccaneers won the Super Bowl.