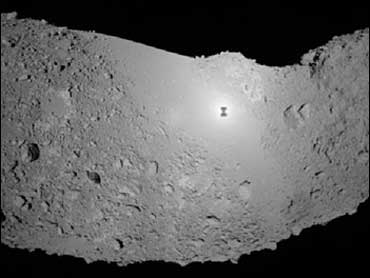 A Japanese space probe apparently succeeded in landing on an asteroid and collecting surface samples Saturday in an unprecedented mission to bring the extraterrestrial material back to Earth for analysis, Japan's space agency said.

The Hayabusa probe touched down for only a few seconds on the faraway asteroid — long enough to collect powder from its surface — and has lifted off again to transmit data to mission controllers, said Kiyotaka Yashiro, a spokesman for JAXA, Japan's space agency.

More data confirming the mission's success is expected later in the day after scientists have examined additional transmissions from the probe, Yashiro said.

But JAXA won't know if Hayabusa actually collected surface samples until it returns to Earth. It is expected to touch down in the Australian Outback in June 2007.

Saturday's landing on the asteroid was Hayabusa's second, following a faulty touchdown Sunday. JAXA lost contact with the probe during that attempt and didn't even realize it had landed until days later — long after Hayabusa had lifted off into orbit.

The space agency hopes that examining asteroid samples will help unlock the secrets of how celestial bodies formed, because their surfaces are believed to have remained relatively unchanged over the eons, unlike larger bodies such the planets or moons.

Hayabusa touched down shortly before 8 a.m. Japan time, firing a metal projectile into the surface and collecting the dust that was kicked up. The whole procedure was over in a matter of seconds.

"It is only a very small amount of material, powder really," Yashiro said.

The landing could compensate for a series of glitches in Japan's attempt to complete the world's first two-way trip to an asteroid.

Two rehearsal touchdowns were botched, one when the spacecraft had trouble finding a landing spot, and one when a small robot rover was lost in space. Hayabusa also had a problem with one of its three gyroscopes.

Hayabusa was launched in May 2003 and has until early December before it must begin its 180 million-mile journey home.

The asteroid is named after Hideo Itokawa, the father of rocket science in Japan, and is orbiting the sun between Earth and Mars. It is 2,300 feet long and 1,000 feet wide.

A NASA probe collected data for two weeks from the asteroid Eros in 2001, but did not return with samples.