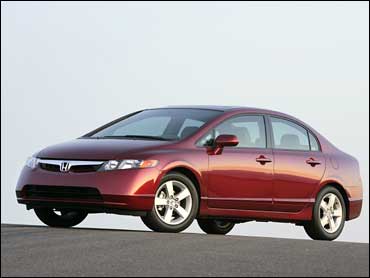 For the first time, all the top picks in Consumer Reports' annual vehicle guide are made by Japanese automakers.

The Honda Civic is the magazine's top small sedan, while the Toyota Highlander Hybrid is the top mid-sized sport utility vehicle, according to results released Wednesday. Vehicles from Nissan Motor Co. and Subaru, a division of Fuji Heavy Industries Ltd., round out the top picks in 10 categories.

Honda was second and the Toyota brand was third in reliability. Ford Motor Co.'s Mercury brand was the only domestic nameplate to crack the top ten.

American and European brands have lagged behind Japanese quality for years, reports Hartge, with some big names at the bottom of the 2006 reliability list — "Mercedes, Volkswagen, Land Rover, Hummer and Porsche," said Champion.

Consumer Reports' rankings are important to automakers, even though companies can't use the ratings in their advertising. Consumer Reports spokeswoman Lauren Hackett said the April auto issue is consistently the magazine's most popular, selling more than 300,000 copies at newsstands. That's twice as many copies as its second-most popular issue, the November electronics issue.

Consumer Reports began its top picks list in 1997. It is based on road and track tests, evaluations of comfort, convenience and fuel economy, crash protection ratings from the government and insurance industry and readers' reliability rankings. The magazine said it recently tested more than 200 vehicles to come up with its top picks.

Toyota and Subaru each had two winners, including the Subaru Forester for small SUV and the Toyota Prius for "green car." Subaru's WRX was named most fun to drive.

Nissan had one, the M35 luxury sedan, which Champion called "roomy, comfortable, sporty to drive, but also very relaxing and easy as well."

Reliability rankings are based on a survey of Consumer Reports subscribers who are asked if they have had serious problems with their vehicles in the past 12 months. The survey questions readers about 17 different trouble spots. For this year's survey, readers rated their experience with 810,000 vehicles from the 1998 through 2005 model years.