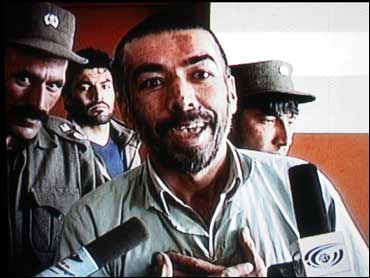 An Afghan man on trial for converting from Islam to Christianity has been moved to a notorious maximum-security prison outside Kabul that is also home to hundreds of Taliban and al Qaeda militants, officials said Sunday.

Abdul Rahman, who faces a possible death sentence for alleged apostasy, was moved to Policharki Prison last week after detainees threatened his life at an overcrowded police holding facility in central Kabul, a court official said on condition of anonymity because he is not authorized to speak to the media.

Gen. Shahmir Amirpur, who is in charge of Policharki, confirmed the move and said Rahman had been begging his guards to give him a Bible.

Doctors to examine Afghan Christian convert on Monday to see if he is mentally fit to stand trial, prosecutor Sarinwal Zamari said. "It has been said that he has mental problems," he said. "Doctors will examine him tomorrow and will then report to us."

Meanwhile, President Hamid Karzai searched for a way to free Rahman without angering Muslim clerics who have called for him to be killed.

Karzai and several Cabinet ministers on Saturday discussed Rahman's case, an official at Karzai's palace said. But she declined to comment on the outcome of the talks.

Hours earlier, another official said Rahman "could be released soon." Both spoke on condition of anonymity because they were not authorized to discuss the matter with the media.

Pope Benedict XVI has sent a message to Karzai asking that the case be dropped, citing respect for religious freedom, the Vatican said Saturday.

But clerics have questioned Karzai's authority to order Rahman's release and have warned of a possible revolt if he tries.

"The Quran is very clear and the words of our prophet are very clear. There can only be one outcome: death," said cleric Khoja Ahmad Sediqi, who is also a member of the Supreme Court. "If Karzai releases him, it will play into the hands of our enemy and there could be an uprising."

Rahman is being prosecuted under Afghanistan's Islamic laws for converting 16 years ago while working as a medical aid worker for an international Christian group helping Afghan refugees in Pakistan.

The case has put Karzai in an awkward position.

While the United States, Britain and other countries that prop up his government have demanded Rahman's release, the president would be reluctant to offend Islamic sensibilities at home or alienate religious conservatives who wield considerable power.

Diplomats have said the Afghan government is searching for a way to drop the case without inflaming tension here. Authorities said Rahman is suspected of being mentally ill and would undergo psychological examinations to see whether he is fit to stand trial.

The trial highlights a conflict of values between Afghanistan and its Western backers, notably American Christians who cheered the Bush administration when it toppled the oppressive Taliban regime in late 2001.

Mr. Bush expressed alarm about the case this week, but Christian lobby groups have urged him to do more.

However, Rahman could be freed before Tuesday, CBS News correspondent Jim Axelrod reported, because Congress is now considering a request from the Bush administration for an additional $2.5 billion this year in aid to Afghanistan.

Tuesday is when U.S. Secretary of State Condoleezza Rice is expected to go to Capitol Hill to make the case for that money.

The pope's message to Karzai came in a letter dated March 22 written by the Vatican's No. 2 official, Cardinal Angelo Sodano, Vatican spokesman Joaquin Navarro-Valls said in a statement Saturday.

"I am certain, Mr. President, that dropping the case against Mr. (Abdul) Rahman would bestow great honor upon the Afghan people and would raise a chorus of admiration in the international community," Sodano said in the letter.

Meanwhile, a respected cleric in the northern city of Mazar-e-Sharif, Mohammed Qasim, said: "We don't care if the West drops its support for us. God will look after Afghanistan."

"We will continue with the trial as is my responsibility under the constitution," said Ansarullah Mawlavi Zada, who like most judges in Afghanistan is also a cleric.

Asked about Rahman's health, the judge said it was "all right."

Authorities have barred journalists from seeing the 41-year-old defendant at a rundown central Kabul detention facility, where prisoners are packed into tiny, overcrowded cells and often rely on food handouts from relatives.

Legal experts have said the case against Rahman is based on contradictory laws.

Afghanistan's constitution is based on Shariah law, which states that any Muslim who rejects Islam should be sentenced to death, according to Ahmad Fahim Hakim, deputy chairman of the state-sponsored Afghanistan Independent Human Rights Commission.

But the constitution adds that "the state shall abide by the ... Universal Declaration of Human Rights." Article 18 of the declaration guarantees the freedom to worship and to "change" religion or belief.