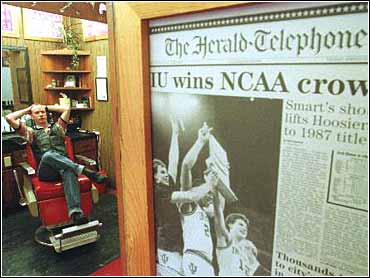 Just down the street from Assembly Hall, they gathered by the dozens around a bar's television to nervously await the verdict.

Would Bob Knight stay or go?

When the news came Monday, the 100 people at Nick's English Hut cheered. They even rang the bar's iron bell in honor of the Indiana coach.

"What can you say? He owns the town," patron Ed Dyer said.

Knight, investigated amid accusations he choked a player in 1997, was allowed to keep his job, but was fined, suspended and told to control his temper. The decision was announced by school president Myles Brand at an Indianapolis news conference.

On a sunny day, in a college town devoted to basketball, Knight's latest brush with trouble came and went with little fanfare.

Scott, who pays a bit more attention to her harpsichord than to sports, said she wasn't surprised Knight was allowed to continue coaching: "I think sports people have different rules that they live by."

Her husband, David Jensen, who happens to make harpsichords, concurred: "What would happen if the president of the university choked a student? That would be a different story because nobody pays to watch the president."

Back at Nick's English Hut, people were happy for the coach.

Knight, who has won three national championships in his 29 years at the school, did not attend the news conference. Leaving his office in Assembly Hall shortly before the conference, Knight declined to comment.

"Why talk now when so many things have been said without ever giving me a chance to talk?" Knight said as he walked away. However, Knight was repeatedly asked to comment on the events and the investigation in recent weeks, but consistently declined.

Elsewhere on campus, where the student body is reduced to those attending summer school, there were no great whoops of support, no banners endorsing The General, and overall, no shock at the ruling.

"I don't think it was really a surprise that he wasn't asked to leave," said Scott Witoszynski, a senior and the student body vice president.

Steven Bierly, a junior, added that Monday's decision could be the beginning of a new and improved Knight.

Leaving the student union with Witoszynski and Bierly, senior Gayle Wolski said the university had to punish Knight, but also had tbe practical.

"Things needed to be done to set an example," she said. "At the same time, if he were terminated, we'd have lost a lot of local and national support, not only for basketball, but for the university."

In the end, Jim Sherman, psychology professor and president of the University Faculty Council, said this latest chapter in the Bob Knight story won't tarnish the school's image.

"The university is not defined by Robert Montgomery Knight," he said.