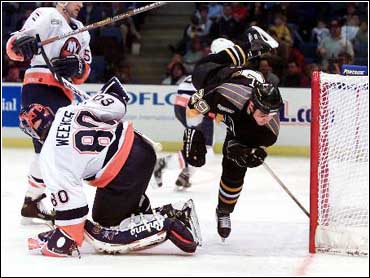 For one night, everything went right for the New York Islanders.

Mariusz Czerkawski had a goal and an assist, and Kevin Weekes made 33 saves as New York beat the Pittsburgh Penguins 4-1 Saturday night.

The team played before its largest non-Rangers crowd since Jan. 2, as 11,229 fans showed up, pleasing coach Butch Goring.

"It was a lot of fun out there, especially with all the fans out there," Goring said. "The players feed off that, and tonight we put out a spirited effort out there."

The spirited effort wasn't limited to the play on the ice.

A crowd of approximately 150 fans organized a protest against the managers of the Nassau Coliseum, SMG, as well as Nassau County executive Tom Gulotta for blocking the sale of the team from the New York Sports Ventures group to one headed by former Rangers president Bob Gutkowski.

Biron gave the Islanders a 1-0 lead at 2:26 of the first when Jean-Sebastien Aubin missed his right-point slap shot.

Czerkawski extended his point-scoring streak to nine games with his 22nd goal to give New York a 2-0 lead at 16:26. Czerkawski, who has six goals and nine assists during his streak, cut across the net and pushed a shot under Aubin's stick.

Hrdina cut the Islanders' lead to 2-1 on the power play at 13:10 of the second with a tip-in of a cross-slot pass from Rob Brown.

Weekes kept the score from being tied with a sensational save against Martin Straa. He kept his right pad parallel to the ice to stop Straka's breakaway attempt at 15:25.

Pittsburgh's Matthew Barnaby and New York's Eric Cairns received unsportsmanlike conduct penalties near the end of the period. Both were sent off the ice by referee Lance Roberts, instead of sitting in the penalty box because there was only 32.7 seconds left in the period.

The hallway that runs between the dressing rooms is separated only by a curtain, and when Cairns saw Barnaby through a gap in the curtain, he started shouting. Both players advanced to the curtain, and Cairns threw a punch. Both players tangled until building security and Pittsburgh goalie Tom Barrasso pried them apart.

"There were a couple of words said," Cairns said. "It was the heat of the battle and there was some tension there. I shouldn't have walked toward him. It's over and done with."

New York's special teams took over in the third period, as they sandwiched a power-play goal with a pair of short-handed goals to seal the win.

Jonsson gave New York a 3-1 lead on a short-handed goal at 2:02 of the final period. He outraced Jaromir Jagr and Alexei Kovalev to a loose puck and broke in alone on Aubin. He beat the goalie with a wrist shot over his left pad. It was only the second short-handed goal of the season for the Islanders, both by Jonsson.

Jamie Heward made it 4-1 at 10:04 with a back-hander on a power play at 10:04, the seventh straight game the Islanders scored a power-play goal.

Claude Lapointe scored another short-handed goal on a slap shot to make it 5-1 at 13:48, giving New York its second straight win and handed the Penguins its first loss in six games (4-1-1).

"Our power play was so maligned for a long time, but in the last six or seven games, there's been some confidence," Goring said. "Our numbers still aren't great, but they're much better than what they were."

The Islanders are gaining confidence overall, according to Goring, and are doing so without five key players.

"Not only are we missing our best two defensemen in Kenny Jonsson and Zdeno Chara, but we're missing three pretty good forwards too," Goring said of injured Brad Isbister, Mats Lindgren and Bill Mucklt.

"There's a lot of character in the locker room, and I think (general manager) Mike Milbury did a great job of getting rid of guys who didn't have character."