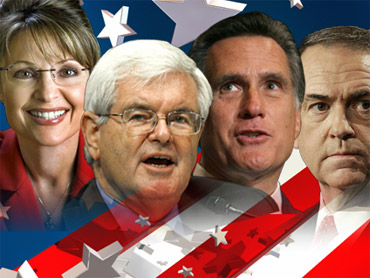 There are a whopping 1189 days until the 2012 election, but you wouldn't know it by looking at the moves of GOP presidential hopefuls. Tim Pawlenty, Mitt Romney, Mike Huckabee, Sarah Palin and other Republicans looking to oust Barack Obama are already lining up staff, raising money, building networks of supporters, and helping fellow politicians as they lay the groundwork for the next battle for the White House. In fact, you have to look no further than the hottest policy issue of the moment - healthcare reform - for signs of the early struggle for Republican constituencies.

This week, Pawlenty and Romney fought over the best method for reforming our nation's healthcare system, each presenting competing ideas, each taking a slight swipe at the other along the way. Pawlenty, the outgoing Governor of Minnesota, trumpeted his state's plan where state employees, "can choose any clinic available to them in the health-care network they've selected," of course those options that are more costly incur higher out of pocket expenses. He also took a stab at Romney's home state of Massachusetts where the former Governor enacted a state-wide insurance system aimed at covering nearly every citizen. A side effect of this plan has been rapidly rising costs of care in the Bay State, costs that Pawlenty pointed out, mean increased fees and taxes. The Minnesota Governor asked in a Washington Post Op-Ed piece, "Imagine the scope of tax increases, or additional deficit spending, if that approach is utilized for the entire country."

Not to be outdone, Romney responded in his own Op-Ed in USA Today where he insisted that President Obama must "dump the public option." The former Governor also countered Pawlenty's accusations of high cost overruns in the Massachusetts plan saying that the state's costs were "pretty much on target."

Both men are seeking to inject themselves into the nation's heated healthcare debate to garner attention, and establish themselves as credible sources on this issue well before they have to argue and debate it in 2012 primary debates.

Romney has something on his side that Pawlenty does not - name recognition. In spite of his defeat in the 2008 Republican primary to John McCain, Mitt Romney has remained quite popular in Republican circles, speaking to a raucous crowd at CPAC in February and even winning the organizations straw poll for 2012. American Conservative Union chairman David Keene referred to Romney as "one of us" at his CPAC introduction, something that may have been impossible to fathom during a presidential campaign where GOP competitors rolled out YouTube moment after YouTube moment of Romney flip-flopping on issues espoused in earlier campaigns for public office. The former Governor's message that February day was one conservatives to latch on to in the days just after Obama's inauguration: fiscal restraint, America first, and local control. Railing against the early plans for healthcare reform, and imploring Washington to provide a big tax cut for middle income Americans, Romney took the plurality of the votes, winning the straw poll for 2012 ahead of other possible contenders like Sarah Palin, Newt Gingrich, Mike Huckabee and even Pawlenty.

Recent polling shows that Republicans have, unsurprisingly, not yet settled on a favorite. A Gallup poll just a few weeks ago, home of the nation's first caucuses, just about 30 months away, showed Romney leading Palin by five-points, 26 - 21 percent, with former Arkansas Governor and current Fox News host Mike Huckabee in third with 19 percent of the vote. A broader poll done by the Washington Post and ABC News found Huckabee ahead 26 - 21 over Romney with Palin and Gingrich nipping at their heals.

One key factor in the 2012 race that may go unnoticed though is the help that these potential candidates offer to other politicians on the ballot in next year's 2010 elections. Palin, a rock star on the road in 2008 who drew thousands at rallies, has been a much-sought after fundraiser for races across the country. For Congressman, Governors, even those running for State House or State Senate, many conservative Republicans are hoping to get a boost from the Palin effect by having the popular former Governor, who has battled with the liberal media lately, into their state or their district for big and small dollar fundraisers. Palin's ability to garner good will from these candidates and their voters will be invaluable should she come calling a year or so later as her potential campaign for the White House was kicking into high gear.

Palin, Romney, Huckabee and others will use many of the pivotal races next year as a chance to up their name recognition among party leaders in states like Texas where there is both a hotly contested GOP primary for Governor and, soon enough, an open Senate seat. Texas is fertile ground for any Republican looking to run nationally, having provided more than $30 million to GOP presidential candidates alone in 2008. Palin has already announced her endorsement of Texas Governor Rick Perry in his primary battle with sitting U.S. Senator Kay Bailey Hutchison, and is "committed to campaigning" for his re-election bid. These campaign stops will allow the former Alaska Governor to make in-roads with Texas grassroots leaders, state Republican organizations, and most importantly - big dollar donors in the Lone Star State.

Look for other aspiring GOPers to follow suit in other state with big 2010 races like Florida, California and Ohio- - all sources of tens of millions in potential campaign donations and growing networks of supporters and grassroots volunteers. Each of the major Republican presidential players don't just work the country raising money for others though, they also seek to fill the tills of their own campaign coffers. Palin has reportedly raised more than $900,000 for her SarahPAC so far in 2009, which is still far behind the more than $1.6 million that Romney has brought in during the same time period. Huckabee trails with just over $300,000 in the bank at this point - and frankly, the organization he's building shows signs of major weakness at this point. One interesting item to watch on Palin's fundraising though is that a surprising 60% of her contributions came in amounts less than $200. That's a good sign as it means she has a broader base of low-dollar donors who she can return to time and time again, a strategy exploited to excellent effect by President Obama his 2008 campaign.

Of course, all these early predictions for a race this far out should be tempered. At this point before the 2008 election Obama wasn't even showing up in polls for the Democratic nomination, and Rudy Giuliani was leading the Republican polls. Both campaigns clearly had a long way to go at that point, one a long way down, and the other all the up to the White House.

As you begin to see the 2010 campaigns kick into high gear after Labor Day with growing amounts of mail, email, phone calls and yes, even TV commercials, keep a close eye on which 2012 hopefuls are backing your candidate for Governor or Senator, or which ones appear on Meet the Press or Fox News Sunday. Even though we are 1189 days away from that 2012 election, right now the groundwork is being laid for an arduous race to come.

Editor's Note: An earlier version incorrectly referred to this Gallup poll as being of Iowans. It was a national poll.

By Brad Jackson:
Reprinted with permission from The New Ledger.