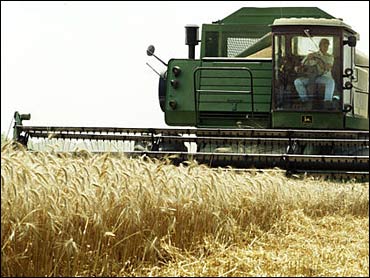 Wheat growers are urging the federal government to stop selling stockpiled wheat on the U.S. market to pay for humanitarian food aid overseas, saying the domestic sales drive down market prices during the ongoing wheat harvest.

"We are talking about the time of year in which it is absolutely critical for the Kansas wheat farmer," said Brewster farmer Ray Crumbaker. "It looks like we are going to have a decent harvest and we have our own government doing something that potentially has a negative affect on our wheat price."

In March, the USDA said it planned to use 800,000 metric tons from the Bill Emerson Humanitarian Trust for food aid in Iraq and Africa.

The wheat trust, named after late Missouri Rep. Bill Emerson, is the government's hedge against famine in case of widespread crop failures. The government also uses the stockpiles to alleviate starvation in developing countries.

The immediate need for humanitarian relief meant most of the wheat actually going into Iraq was part of a wheat swap with nearby countries. But in addition to the swaps, some of the stockpiled wheat in the Emerson reserve is also being sold.

"While we strongly support USDA's role in providing food aid using the trust and other resources, sales of wheat into the domestic market - particularly during harvest - have caused difficulties for producers and warehouses in the United States," the wheat groups told Penn in a letter.

Penn and his press spokesman were en route to California Thursday for a meeting and could not be immediately reached for comment.

It is unclear just how much of an impact, if any, the trust sales are having on market prices because so many factors affect the market and because prices are usually lower at harvest, Crumbaker said.

"Anytime there is extra grain being dumped into channels we feel it can affect prices, especially during harvest time," said Brett Myers, executive director of the Kansas Association of Wheat Growers.

Tom Tunnell, executive director of the Kansas Grain and Feed Association, said at the time the trust sales were first announced, traders told him it would not negatively impact the wheat market.

On a tour of grain elevators in northern Kansas Thursday, Tunnell said he saw little harvesting but great crops. He said those reports of high yields are probably affecting market prices.

"It is going to be a tremendous wheat harvest," he said.

Wheat industry leaders said Congress has appropriated some $69 million for the purchases of commodities - in addition to $1.2 billion allocated directly for food aid. They want the U.S. government to use those resources first to support humanitarian relief efforts.

"We don't have a problem with them shipping grain over there," Myers said. "That is not the problem. The problem is selling it into the open market to buy other commodities with it."