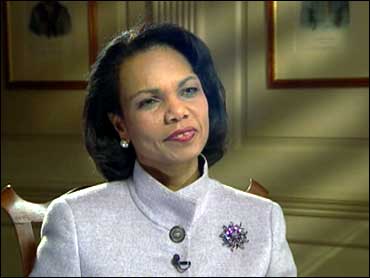 CBS News Reporter Charles Wolfson is a former Tel Aviv bureau chief for CBS News, who now covers the State Department. He is travelling with Secretary of State Rice in London

Diplomats are constantly juggling different problems and Secretary of State Condoleezza Rice's current trip to London, Jerusalem and Ramallah is a good example. Pushing the Bush administration's Middle East peace initiative will dominate much of Rice's time but it will by no means be the only big issue she has to deal with in the next few days.

In London Rice will sit down with fellow foreign ministers of the so-called P-5+1 group---Russia, China, the United Kingdom, France and Germany-to have yet another discussion on Iran and what steps that country is taking to develop nuclear weapons. Specifically, the meeting will look at the two tracks --- sanctions and incentives--- which are being pursued to persuade Tehran to stop its nuclear enrichment and reprocessing activities, so far with no success.

A senior State Department official travelling with Rice said she would devote part off her time in London to encouraging other countries to make good on their pledges of financial aid to the Palestinian Authority. The senior official said most members of the Arab League were "woefully short" in following through on payment of their pledges.

Even with three U N Security Council sanctions resolutions on the books Iran has given no real indication it will comply with the demands of the international community. Thus some of Rice's partners want to sweeten the package of incentives being offered. Rice told reporters travelling with her to London she's willing to review the package but, she said, "I don't think the problem is the package. I think the problem is Iranian will."

Rice will also have to deal with Russia's foreign minister, Sergei Lavrov, about rising tensions between Russia and Georgia over South Ossetia and Abkhazia, two region of Georgia which border Russia and which have resisted rule from Tblisi. Moscow has taken several actions recently which the Bush administration sees as provocative and Rice says "it is extremely important that Russia accept the territorial integrity of Georgia." Rice says she is very concerned about the situation, something the Russians already are well aware of.

Kosovo will also be on the diplomatic menu in London. Since Kosovo declared its independence in mid-February, Rice said "things have gone not too badly." Rice wants to ensure there is no effort to partition the country and getting more European police on the ground there will help. There has been "a little bit of turbulence," Rice concedes, "but nobody expected there'd be no turbulence."

However, with President Bush about to visit Israel the middle of the month, talking to Israelis and Palestinians will take up most of Rice's time in the coming days.

"I think they are making progress," Rice told reporters en route to London. Senior Israeli and Palestinian negotiators have held many meetings and there have been few leaks to the press leading to speculation not much is happening. Rice said just because "one can't see churning under the water" doesn't mean there is no progress.

Still, those who have followed the talks say Rice is under pressure to make headway, especially with Mr. Bush soon to be in the region himself. Rice herself concedes there is a danger time will run out on the administration's efforts. "You could argue the window (of opportunity) has gotten narrower and narrower over time," Rice said. For now, the secretary of state emphasizes optimism: "I think it is far too early to have any sense of despair about the end of the year that has been set as a goal by both sides."