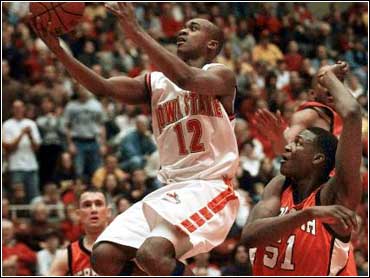 Iowa State's Marcus Fizer was almost perfect against Nebraska. So was his team.

Fizer made all but one of his shots in scoring 23 points and No. 17 Iowa State blew away Nebraska with a huge second-half run in an 87-65 victory Saturday night.

Iowa State (21-3 overall, 9-1 Big 12) built an early 15-point lead, faltered slightly and fell behind, then regrouped and broke it open to stay tied with Oklahoma State for first place in the conference.

"This was a game that worried me," Iowa State coach Larry Eustachy said. "They are a very talented team and were capable of coming in here and beating us.

"I always say it's tough to keep coming out and throwing your A game out there for 30-something games. I'm really pleased with the second half."

They were close for a while in this one, however, trailing by just three early in the second half. Then Iowa State kicked into a high gear and outscored the Cornhuskers 29-5 over the next six minutes.

"I'm pretty sure their coach came down on them in the locker room just by the way they came out and pressured us and said hey, these guys shouldn't be playing with us at home," Nebraska's Rodney Fields said.

"We didn't sustain the pressure, kind of broke down a little, one thing led to another and before you know, we were down by double digits."

The Cyclones finished their run with 17 straight points to open a 70-43 lead, a burst that featured two sensational fast breaks in a 31-second span. Jamaal Tinsley fed Fizer for a two-handed dunk to finish the firt one and Tinsley hit Stevie Johnson for a layup on the second one.

Michael Nurse hit two 3-pointers and scored nine points during the run. He finished with 19. Fizer had eight points and finished 9-for-10 from the field. His only miss was an attempted tip-in, which he followed with a tip that went in.

"Fizer is just a tremendous player in all aspects," Nebraska coach Danny Nee said. "Each year that I've seen him, the man just improves. Right now he is playing at an MVP-type level."

"We had to limit their shots in the second half," Fizer said. "They shot 50 percent in the first half and we knew we had to come back and play better defense and rebound better to win."

Iowa State bolted to an 18-3 lead as Horton scored seven points and Nebraska missed nine of its first 10 shots. But the Cornhuskers settled down and came back with a 21-5 run that ended with 3-pointers by Fields, Walker and Louis Truscott for a 26-25 lead.

The Cornhuskers went 11 possessions without scoring during one stretch, missing four shots and committing seven turnovers.

"The early start was fantastic," Eustachy said. "The last 10 minutes of the first half were very poor by our team, then we had a nice second half. What happened was we got a little complacent. We didn't play as hard as the opponent and the opponent had a lot to do with it."