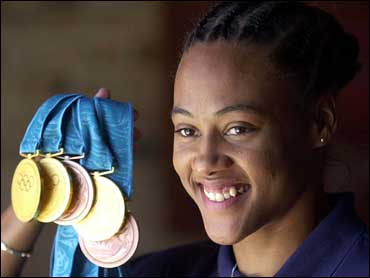 International Olympic leaders are finally ready to reallocate the individual medals stripped from Marion Jones for doping — but withhold the 100-meter gold from another drug-tainted athlete, The Associated Press has learned.

Nine years after the 2000 Games, the International Olympic Committee is set to redistribute some of the five medals — three gold and two bronze — that Jones won in Sydney with the aid of performance-enhancing drugs.

At a two-day meeting starting Wednesday in Lausanne, Switzerland, the IOC executive board will decide to hand out Jones' gold in the 200 meters and bronze in the long jump but not give disgraced Greek sprinter Katerina Thanou the 100-meter gold, officials with direct knowledge of the plans told the AP on Monday.

The officials spoke on condition of anonymity because the decision hasn't been announced yet.

While Pauline Davis-Thompson of the Bahamas is to be upgraded from silver to gold in the 200, the IOC will not reward Thanou in the 100 because she was at the center of another drug scandal at the 2004 Athens Olympics.

Thanou and fellow Greek runner Kostas Kenteris missed drug tests on the eve of the opening ceremony, claimed they were injured in a motorcycle crash and were hospitalized. They were forced to pull out of the games and were later banned for two years by the International Association of Athletics Federations.

Thanou and Kenteris — the men's 200-meter winner in Sydney — are still awaiting trial in Greece on misdemeanor charges of staging the motorcycle crash to avoid the drug tests.

Although Thanou never tested positive and has not been linked to doping in Sydney, the IOC can deny her the gold medal based on her behavior in Athens, the officials told the AP.

The IOC barred Thanou from last year's Beijing Games, saying her drug-testing case in Athens was a "scandalous saga" that brought the Olympics into disrepute.

The prospect of Thanou being promoted to the gold medal has vexed IOC leaders ever since Jones admitted in 2007 that she used steroids at the time of the Sydney Games. Jones, who had been the first female athlete to win five medals at a single Olympics, served a six-month prison sentence last year for lying about doping and her role in a check-fraud scam.

The IOC stripped Jones of her five medals, which also included gold in the 4x400 relay and bronze in the 4x100 relay, in December 2007. But the committee has held off redistributing the medals pending legal issues and further developments in the BALCO steroid probe.

While the IAAF is in charge of amending the official results and rankings, the IOC has jurisdiction over the medals.

"I cannot know what the outcome of the discussion will be, but not all cases need necessarily to have the same treatment or the same result," IOC executive board member Denis Oswald said in a telephone interview Monday.

Thanou's lawyers have indicated she could sue or appeal to the Court of Arbitration for Sport to get the medal. In order to make a law suit more difficult, the IOC is not expected to make a formal announcement that it is denying Thanou the gold, but simply say that no decision was made to reallocate the medal.

"On an image issue, I would prefer to err on the side of not giving the medal and let her sue," said Dick Pound, a Canadian IOC member and former head of the World Anti-Doping Agency who is not on the decision-making executive board. "If a CAS panel thinks that she's legally entitled to it, then let them take the heat."

While the gold medal will remain vacant, third-place finisher Tanya Lawrence will move up to the silver and fellow Jamaican Merlene Ottey from fourth to bronze. Thanou would keep her silver, meaning Lawrence would get a duplicate medal.

In the 200, the gold will go to Davis-Thompson, with Sri Lanka's Susanthika Jayasinghe promoted from bronze to silver and Jamaica's Beverly McDonald from fourth to third.

The IAAF urged the IOC in August to speed up the process for reassigning Jones' medals.

"The IAAF position is clear — we are waiting for the decision of the IOC on this matter, and hope that it can be concluded as soon as possible," IAAF spokesman Nick Davies said in an e-mail on Monday.

On the IAAF Web site, Jones is still listed in her Sydney medal placings with an asterisk noting "subject to IOC decision."

"As for the allocation of the medals/results by the IOC, we await their decision and do not want to prejudge that," Davies said.

Still undecided is the fate of the relay medals.

In April 2008, the IOC stripped all the relay medals because of Jones' doping. But the relay runners appealed to CAS, arguing it was wrong to punish them for Jones' violations. CAS is due to release its verdict by Dec. 18, and the IOC will wait until then before deciding on the reallocation of the relay medals.Jones' teammates on the 4x400 squad were Jearl-Miles Clark, Monique Hennagan, LaTasha Colander-Richardson and Andrea Anderson. Chryste Gaines, Torri Edwards, Nanceen Perry and Passion Richardson were on the 4x100 team.

Jamaica took silver behind the U.S. in the 4x400 relay and will move up to gold if the standings are adjusted. Russia was third and Nigeria fourth. In the 4x100, France was fourth behind the Americans.