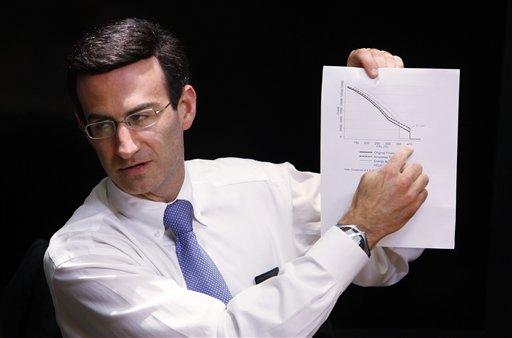 The health insurance industry doesn't want Congress to let you off easy if you decide to ignore a proposed requirement that all Americans must have coverage.

Determined to get as many people as possible covered, lawmakers first proposed fines of as much as $3,800 per family for health insurance scofflaws. But they have been steadily scaling back the penalties, with the Senate Finance Committee last week dropping them to $1,500 maximum per family in their version of a health care bill. The committee also phased the penalties in over five years with no fines at all in the first year and eliminated all criminal and most civil punishments for failure to pay.

The industry _ counting on millions of more Americans buying insurance _ says the penalties are now so weak they practically beg to be ignored. The result, the companies warn, is that people would wait until they get sick to buy coverage. That would raise premiums for everyone else, since Congress' health care overhaul would also require insurers to take all applicants.

"People will drop coverage and those who stay in would see rate shock," Karen Ignagni, president of America's Health Insurance Plans, the insurance industry trade group, said in an interview Monday.

The proposed new so-called individual mandate requiring everyone to buy health coverage or pay a fine is at the center of all the health care bills taking shape on Capitol Hill. After opposing it during his campaign for president, President Barack Obama embraced it earlier this year as the most effective way to get everyone covered as long as hardship waivers were included.

Subsidies would be provided to help low-income people afford the coverage. But many Democrats and consumer groups have begun to argue that the subsidies are not generous enough and that middle-income people still wouldn't be able to afford health care.

"There's no doubt there's a trade-off," between keeping down costs and getting more people covered, White House budget director Peter Orszag said Monday in an interview with The Associated Press.

That was a major issue for the Finance Committee as it wrapped up work last week on sweeping legislation to extend coverage to uninsured Americans and make major changes in the insurance market, such as barring insurers from charging women more or denying coverage to people with pre-existing conditions.

A final amendment to the Finance Committee bill addressed the affordability issue by exempting millions more people from the requirement to buy insurance, reducing and phasing in the penalties and getting rid of most legal repercussions if you don't pay the penalties.

Originally, the bill required individuals and families to buy coverage as long as it cost no more than 10 percent of their income. Under the change, that would be lowered to 8 percent.

Sen. Chuck Schumer, D-N.Y., acknowledged the result would be an estimated 2 million additional individuals and families going without insurance in comparison with the original bill.

Insurers say the changes made the mandate toothless. And they've long argued that the only way they can keep premiums down while implementing the consumer protections like not charging more to sick people is by making sure that everyone is in the coverage pool.

"It might seem like they are solving the problem, but what happens is premiums for everyone are going to get more expensive in the new market," said Fox.

"It only works when everyone is in the pool," she added.

The Finance Committee is preparing for a final vote on its bill this week after which it wil be merged with legislation from the Health, Education, Labor and Pensions Committee. In the House, lawmakers are working to meld health overhaul bills from three committees into one piece of legislation.

Insurers will be lobbying to strengthen the penalties. But on the other side, consumer groups say lawmakers still haven't gone far enough to address affordability concerns.

Senators say they're trying to balance the competing demands.

"We want to insure as many people as possible under this bill, but not in a way that forces people into plans they can't afford," said Schumer.

Sen. Debbie Stabenow, D-Mich., said, "We all have to be part of the solution and have health care, but we don't want an onerous burden on individuals or families."