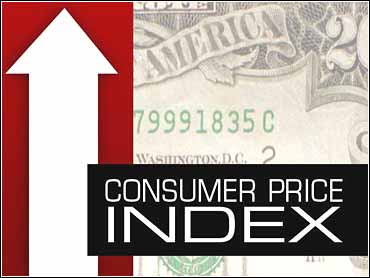 Consumer prices rose a modest 0.3 percent in June, half the size of the previous month's advance and fresh evidence that inflation poses no immediate threat to the economy.

The over-the-month increase in the Consumer Price Index — the government's most closely watched inflation barometer — followed a 0.6 percent spike in May, reflecting a big jump in energy and food costs, the Labor Department reported Friday.

In June, energy and food costs went up, but not by nearly as much. That helped to moderate overall consumer prices and brought a little bit of relief to Americans who have been forced to dig deeper into their pockets to fill up their gasoline tanks and buy groceries.

Excluding energy and foods costs, "core" prices nudged up by just 0.1 percent in June, down from a 0.2 percent rise in May and the smallest increase since December 2003. From an economic point of view, that deceleration suggested prices of other goods and services were relatively stable.

Economists were expecting both the overall CPI and core prices to each rise by 0.2 percent in June.

Federal Reserve Chairman Alan Greenspan and his colleagues raised interest rates for the first time in four years on June 30. It was an effort to make sure the expanding economy doesn't ignite an unwelcome rise in inflation. The Fed increased a key rate to 1.25 percent, from a 46-year low of 1 percent.

Fed policy-makers at that meeting said they were holding to the view that inflation currently doesn't pose a problem and that rates can be moved up gradually. But if inflation shows signs of becoming a problem, the Fed said it would take more aggressive action.

"This fits right in with the Fed's script for measured tightening of monetary policy," said Mark Zandi, chief economist at Economy.com. "It confirms their thinking that the pickup in inflation seen earlier this year was indeed largely temporary."

At their June meeting, Fed policy-makers said: "Although incoming inflation data are somewhat elevated, a portion of the increase in recent months appears to have been due to transitory factors." Policy-makers said they expected underlying inflation "to be relatively low."

At the wholesale level, prices actually fell by 0.3 percent in June, the government reported Thursday.

Zandi and other economists continue to believe the Fed will increase rates by another one-quarter percentage point when it meets next in August. Rates are still at low levels that could sow the seeds of unwanted inflation down the road, economists said.

On Thursday, the Labor Department reported a 0.3 percent drop in the Producer Price Index for the month of June. It was the biggest decrease in a year. That came after wholesale costs shot up in the prior two months, reflecting sharply higher prices for energy and food. Wholesale prices had risen by 0.7 percent in April and by 0.8 percent in May.

The latest reading on the PPI, which measures the prices of goods before they reach store shelves, surprised economists, who were forecasting a 0.2 percent rise in wholesale prices in June.

Separately, the Federal Reserve reported that industrial production at the nation's factories, mines and utilities dropped 0.3 percent in June, it marked the largest decline since April 2003. That followed a 0.9 percent advance in May.

In the CPI report, energy prices rose by 2.6 percent in June, down from a 4.6 percent advance in May. Gasoline prices last month went up by 3.1 percent — down from a 8.1 percent jump in May. Natural gas and fuel oil prices each rose by 4.4 percent last month. Electricity prices increased 1.1 percent.

Food prices, which soared by 0.9 percent in May in part reflecting more expensive transportation costs due to higher fuel costs, rose by just 0.2 percent in June. Falling prices for fruit and vegetables helped to temper rising prices for dairy products, pork, poultry and beef and veal.

Elsewhere in the report, medical care costs rose by 0.3 percent in June and college tuition and fees jumped by 0.6 percent. Both categories are sore spots for consumers.

Even though Greenspan isn't currently worried that inflation will break out, the rise in prices this year is a big change from last year when Fed policy-makers were concerned about the remote threat of deflation, an economically dangerous, widespread decline in prices.