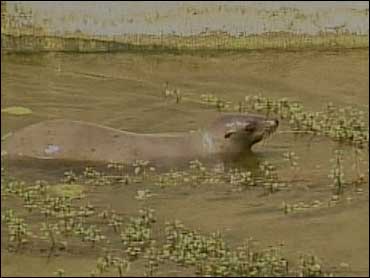 In an urban creek, where a kid is lucky to see a frog, spotting a sea lion in the murky water is more than an adventure - it's a mystery.

"When I first saw him, and my mom told me, I was like 'Whoa! How'd he get down there?'" said Deja King, one of several sea lion observers.

The young sea lion, about 150 pounds, showed up in late June between the concrete banks of a stream that meanders through the office parks of Silicon Valley, reports CBS News correspondent John Blackstone.

"I think he just swam up here by mistake and didn't know where he was going," said Cameron Whitaker.

While it's an excellent swimmer, the sea lion had to get to the deep pool that would become its temporary home the hard way - by waddling some three miles up a nearly dry creek bed, all the way from San Francisco Bay.

Far from home, the sea lion became both an instant celebrity and a source of worry.

"It just kind of hurts my heart to see it in this kind of bad situation here," said Eric Frietas.

So a rescue team was assembled. The sea lion had been enjoying the sunshine but headed immediately for the water, where it had a clear advantage over its would-be captors. They'd tried and failed on two previous missions, so this time they decided not to chase it all over the pool.

"Rather than try and run, we would have been exhausted and just looked like buffoons," said Sue Pemberton of the Marine Mammal Center.

Instead, they patiently herded it into a corner where it eventually swam into a net. But even then, the challenge wasn't over.

"He was barking, trying to bite," said King.

When it's finally released in the open ocean, perhaps it will know this was all for its own good.