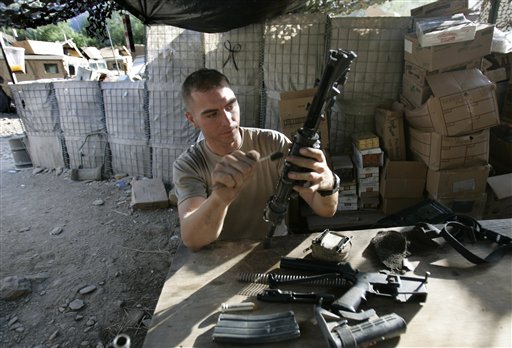 It was chaos during the early morning assault last year on a remote U.S. outpost in Afghanistan and Staff Sgt. Erich Phillips' M4 carbine had quit firing as militant forces surrounded the base. The machine gun he grabbed after tossing the rifle aside didn't work either.

When the battle in the small village of Wanat ended, nine U.S. soldiers lay dead and 27 more were wounded. A detailed study of the attack by a military historian found that weapons failed repeatedly at a "critical moment" during the firefight on July 13, 2008, putting the outnumbered American troops at risk of being overrun by nearly 200 insurgents.

Which raises the question: Eight years into the war against the Taliban in Afghanistan, do U.S. armed forces have the best guns money can buy?

Despite the military's insistence that they do, a small but vocal number of troops in Afghanistan and Iraq has complained that the standard-issue M4 rifles need too much maintenance and jam at the worst possible times.

A week ago, eight U.S. troops were killed at a base near Kamdesh, a town near Wanat. There's no immediate evidence of weapons failures at Kamdesh on Oct. 3, but the circumstances were eerily similar to the Wanat battle: insurgents stormed an isolated stronghold manned by American forces stretched thin by the demands of war.

Army Col. Wayne Shanks, a military spokesman in Afghanistan, said a review of the battle at Kamdesh is under way. "It is too early to make any assumptions regarding what did or didn't work correctly," he said.

Complaints about the weapons the troops carry, especially the M4, aren't new. Army officials say that when properly cleaned and maintained, the M4 is a quality weapon that can pump out more than 3,000 rounds before any failures occur.

The M4 is a shorter, lighter version of the M16, which made its debut during the Vietnam war. Roughly 500,000 M4s are in service, making it the rifle troops on the front lines trust with their lives.

Sen. Tom Coburn, R-Okla., a leading critic of the M4, said Thursday the Army needs to move quickly to acquire a combat rifle suited for the extreme conditions U.S. troops are fighting in.

U.S. special operations forces, with their own acquisition budget and the latitude to buy gear the other military branches can't, already are replacing their M4s with a new rifle.

"The M4 has served us well but it's not as good as it needs to be," Coburn said.

Battlefield surveys show that nearly 90 percent of soldiers are satisfied with their M4s, according to Brig. Gen. Peter Fuller, head of the Army office that buys soldier gear. Still, the rifle is continually being improved to make it even more reliable and lethal.

Fuller said he's received no official reports of flawed weapons performance at Wanat. "Until it showed up in the news, I was surprised to hear about all this," he said.

The study by Douglas Cubbison of the Army Combat Studies Institute at Fort Leavenworth, Kan., hasn't been publicly released. Copies of the study have been leaked to news organizations and are circulating on the Internet.

Cubbison's study is based on an earlier Army investigation and interviews with soldiers who survived the attack at Wanat. He describes a well-coordinated attack by a potent enemy that unleashed a withering barrage with AK-47 automatic rifles and rocket-propelled grenades.

The soldiers said their weapons were meticulously cared for and routinely inspected by commanders. But still the weapons had breakdowns, especially when the rifles were on full automatic, which allows hundreds of bullets to be fired a minute.

Cubbison acknowledges the high rates of fire during the two-hour battle may have led to the failures. But he says numerous problems occurred relatively early in the engagement.

The platoon-sized unit of U.S. soldiers and about two dozen Afghan troops was shooting back with such intensity the barrels on their weapons turned white hot. The high rate of fire appears to have put a number of weapons out of commission, even though the guns are tested and built to operate in extreme conditions.

Cpl. Jonathan Ayers and Spc. Chris McKaig were firing their M4s from a position the soldiers called the "Crow's Nest." The pair would pop up together from cover, fire half a dozen rounds and then drop back down.

On one of these trips up, Ayers was killed instantly by an enemy round. McKaig soon had problems with his M4, which carries a 30-round magazine.

"My weapon was overheating," McKaig said, according to Cubbison's report. "I had shot about 12 magazines by this point already and it had only been about a half hour or so into the fight. I couldn't charge my weapon and put another round in because it was too hot, so I got mad and threw my weapon down."

The soldiers also had trouble with their M249 machine guns, a larger weapon than the M4 that can shoot up to 750 rounds per minute.

Cpl. Jason Bogar fired approximately 600 rounds from his M-249 before the weapon overheated and jammed the weapon.

Bogar was killed during the firefight, but no one saw how he died, according to the report.