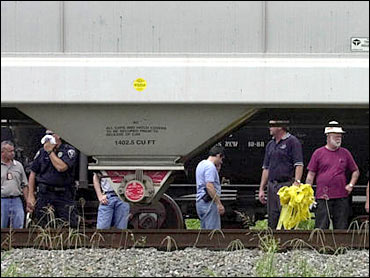 Union Pacific spokesman Mark Davis said the company had been looking for the three immigrants since Monday, when officials learned about those left behind in the rail car at La Coste, near San Antonio.

The car was found in a railyard in Baytown, just east of Houston and more than 240 miles east of La Coste, but by then the immigrants were dead, Davis said.

The two who escaped had used clothing they tied together to get out of the covered hopper car, according to Harris County Sheriff's Capt. Robert Van Pelt. He said the surviving immigrants told authorities the three who remained on the train were "too weak to get out."

The immigrants found a priest in Austin who contacted the Mexican consulate, which in turn informed the railroad that three others were left behind.

The train had traveled to Baytown from Los Angeles, and Davis said the immigrants reported jumping aboard Friday about 100 miles west of La Coste.

The surviving immigrants said they "voluntarily boarded the train and that there were no smugglers or `coyotes' involved," Davis said.

Tuesday's discovery comes three weeks after a stifling truck trailer filled with more than 70 immigrants was discovered abandoned in Victoria in south Texas. Seventeen of the immigrants were found dead at the scene and two more died after being hospitalized.

Seven people have been arrested in connection with the smuggling operation.