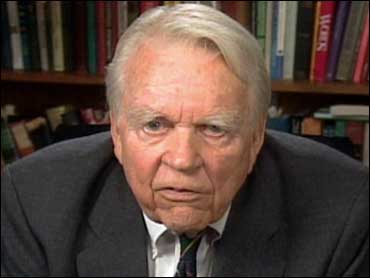 This segment was originally broadcast on Oct. 2, 2005.

I'm not really clear how much a billion dollars is but the United States — our United States — is spending $5.6 billion a month fighting this war in Iraq that we never should have gotten into.

More than 2,000 Americans have died there. For what?

Now we have the hurricanes to pay for. One way our government pays for a lot of things is by borrowing from countries like China.

Another way the government is planning to pay for the war and the hurricane damage is by cutting spending for things like Medicare prescriptions, highway construction, farm payments, AMTRAK, National Public Radio and loans to graduate students. Do these sound like the things you'd like to cut back on to pay for Iraq?

I'll tell you where we ought to start saving: on our bloated military establishment.

No other Country spends the kind of money we spend on our military. Last year Japan spent $42 billion. Italy spent $28 billion, Russia spent only $19 billion. The United States spent $455 billion.

We have 8,000 tanks for example. One Abrams tank costs 150 times as much as a Ford station wagon.

We have more than 10,000 nuclear weapons — enough to destroy all of mankind.

We had a great commander in WWII, Dwight Eisenhower. He became President and on leaving the White House in 1961, he said this: "We must guard against the acquisition of unwarranted influence, whether sought or unsought, by the military-industrial complex. The potential for the disastrous rise of misplaced power exists and will persist. …"

Former DEA chief in 2010 on Viktor Bout
Thanks for reading CBS NEWS.
Create your free account or log in
for more features.
View CBS News In
CBS News App Open
Chrome Safari Continue
Be the first to know
Get browser notifications for breaking news, live events, and exclusive reporting.