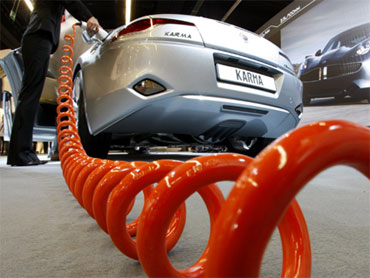 Officials said Tuesday that Fisker has agreed to buy the plant for $18 million and will spend another $175 million to refurbish it over three years.

Vice President Joe Biden was among those on hand to announce a new lease on life for the GM plant, which produced the Saturn Sky and Pontiac Solstice roadsters, as well as an Opel version that was exported to Europe, before closing this summer.

Fisker recently received approval for $528.7 million in government loans to develop plug-ins, and the next-generation cars to be built in Delaware are expected to reach showrooms by 2012.

"Thanks to a real commitment by this administration, loans from the Department of Energy, the creativity of U.S. companies and the tenacity of great state partners like Delaware, we're on our way to helping America's auto industry reclaim its top position in the global market," said Biden.

Last month, the Department Energy announced a $528.7 million conditional loan for Fisker to develop lines of plug-in hybrids, of which $359 million will be spent putting the Boxwood Plant back on line supporting the production of Fisker's hybrid sedan.

Many of the jobs created will likely go to former GM or Chrysler auto workers, said the Vice President's office.

The Fisker loan is the fourth conditional loan commitment made by the Energy Department as part of the Advanced Technology Vehicles Manufacturing (ATVM) loan program, intended for large and small auto manufacturers and parts suppliers. Other loans have been awarded to Ford ($5.9 billion), Nissan ($1.6 billion) and Tesla ($465 million). 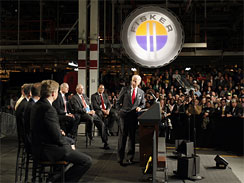 (AP Photo/Rob Carr )
In July Biden announced a $3.8 million dollar National Emergency Grant to the state to help provide retraining, job search assistance, and other employment services for workers laid off when General Motors shut its plants in Wilmington and Newark.

In September the Commerce Department's Economic Development Administration awarded two grants (totaling $1.2 million) for the development of a Green Building Technology and Alternative Energy Training Center at Delaware Technical and Community College in Georgetown, and to the state to aid in revamping manufacturing sites.

Motors Liquidation Company (MLC), which owned the former GM site, worked with negotiators to ensure the plant remained viable for re-use by Fisker.