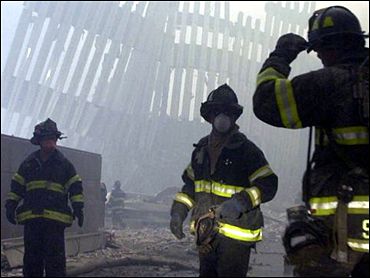 Unable to identify all the remains from the World Trade Center collapse, authorities in New York will bury the unidentified body parts at the site in the hope that future science will give them names, a newspaper reports.

The New York Times reports the plan is meant to give families a sense of closure while keeping open the possibility of identifying the remains later on.

More than 19,000 body parts were recovered from Ground Zero, belonging to the 2,792 victims of the attacks. Some 12,000 remains ranging in size from bone chips to 100-pound parts — or 63 percent of the total — remain unidentified. The names of 1,271 victims, or 46 percent, have not been matched to remains.

The delay has put a strain on families, according to The Times. Some have conducted memorial services only to be notified later than remains had been recovered. Some families have asked not to be notified about additional remains after a certain date.

Many have said they want a place where they can visit with the departed. That is what the memorial will do.

"Our job is to inter them and if technology changes in the future, and we have a better chance to identify them, we will have to keep and preserve the remains in such a way that we can use this new technology," Shiya Ribowsky, the deputy director of investigation for the medical examiner, told The Times. "This is a very respectful and practical way for caring for these remains in perpetuity."

The remains will be dried and then vacuum-sealed in white pouches. That way they can be preserved without refrigeration.

"We have gotten DNA from mummies that are 3,000 years old. Drying is a great way to preserve things for a long period of time," Ribowsky said.

Then they will be placed within the memorial that is eventually to take form on the site. The memorial design will be selected this fall from 5,000 entries. All designs were required to set aside space for the remains.