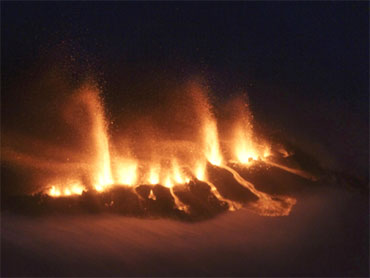 A volcano in southern Iceland has erupted for the first time in almost 200 years, raising concerns that it could trigger a larger and potentially more dangerous eruption at a volatile volcano nearby.

The eruption at the Eyjafjallajokull volcano, located near a glacier of the same name, shot ash and molten lava into the air but scientists called it mostly peaceful. It occurred just before midnight Saturday (2000 EDT, 8 p.m. EDT) at a fissure on a slope — rather than at the volcano's summit — so scientists said there was no imminent danger that the glacier would melt and flood the area.

TV footage showed lava flowing along the fissure, and many flights were canceled due to the threat of airborne volcanic ash. After an aerial survey Sunday, scientists concluded the eruption struck near the glacier in an area that had no ice.

"This is the best possible place for an eruption," said Tumi Gudmundsson, a geologist at the University of Iceland.

Nonetheless, officials sent phone messages to 450 people between the farming village of Hvolsvollur and the fishing village of Vik, some 100 miles southeast of the capital, Reykjavik, urging them to evacuate immediately.

A state of emergency was declared although there were no immediate reports of injuries or damage. Evacuation centers were set up near the town of Hella, but many people returned to their homes later Sunday. The most immediate threat was to livestock because of the caustic gases the eruption released.

"We had to leave all our animals behind," Eli Ragnarsdottir, a 47-year-old farmer, told RUV, Iceland's national broadcaster from an evacuation center. "We got a call and a text message ... and we just went."

Scientists say it is difficult to predict what comes next. Like earthquakes, it is hard to predict the exact timing of volcanic eruptions.

"It could stop tomorrow, it could last for weeks or months. We cannot say at this stage," Gudmundsson said.

The last time there was an eruption near the 100-square-mile Eyjafjallajokull glacier was in 1821, and that was a "lazy" eruption — it lasted slowly and continuously for two years.

The latest eruption came after thousands of small earthquakes rocked the area in the past month. Scientists in Iceland have been monitoring the volcano using seismometers and global positioning instruments, but Gudmundsson noted that the beginning of Saturday's eruption was so indistinct that it initially went undetected by the instruments.

"The volcano has been inflating since the beginning of the year, both rising and swelling," said Pall Einarsson, a geophysicist at the University of Iceland's Institute of Earth Science. "Even though we were seeing increased seismic activity, it could have been months or years before we saw an eruption like this ... we couldn't say that there was an imminent risk for the area."

Einarsson and Gudmundsson said the eruption could trigger a more damaging eruption at the nearby Karla volcano, which lies under the thick Myrdalsjokull icecap and threatens massive flooding and explosive blasts if it erupts.

"One of the possible scenarios we're looking at is that this small eruption could bring about something bigger. This said, we can't speculate on when that could happen," Einarsson told The Associated Press.

Iceland, a nation of 320,000 people, sits on a large volcanic hot spot in the Atlantic's mid-oceanic ridge. Volcanic eruptions, common throughout Iceland's history, are often triggered by seismic activity when the Earth's plates move and when magma from deep underground pushes it's way to the surface.

All domestic flights in Iceland were canceled because airborne ash might interfere with aircraft engines, although Reykjavik appeared to be unaffected with clear visibility.

Aviation authorities were to determine whether it is safe to fly again early Monday.

A flight to Oslo was canceled, but most international flights into and out of Iceland were delayed but returning to normal, Icelandair said. The airline's flights from the U.S. — departing from Seattle, Boston and Orlando, Florida — were due later Sunday in Reykjavik. Earlier, a flight was turned back to Boston, leaving about 500 people waiting for hours.

First settled by Vikings in the 9th century, Iceland is known as the land of fire and ice because of its volcanoes and glaciers. During the Middle Ages, Icelanders called the Hekla volcano, the country's most active, the "Gateway to Hell," believing that souls were dragged below.

In the mid-1780s, the Laki volcano erupted, causing scores to die of famine when livestock and crops were destroyed and changing weather patterns across Europe.
By Associated Press Writer Gudjon Helgason