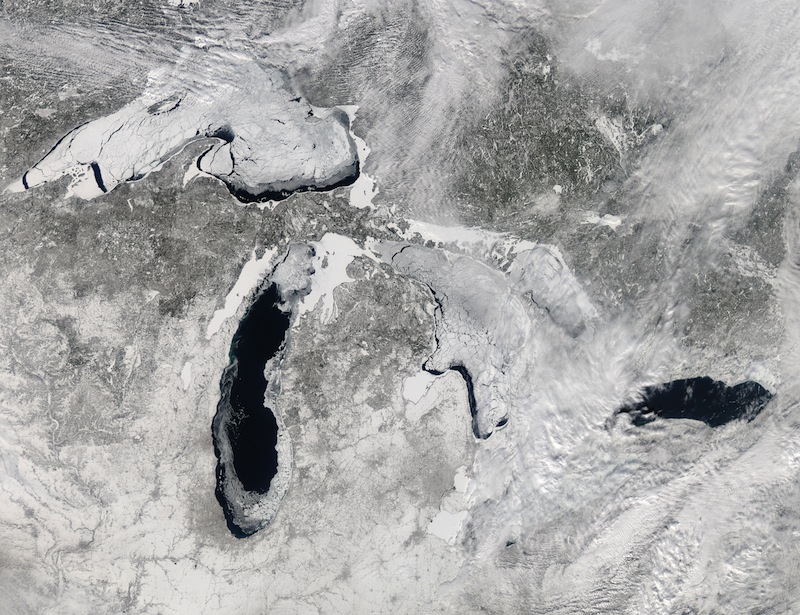 A deep freeze has settled in over the Great Lakes this winter and a new image released by NASA shows the astonishing extent of the ice cover as seen from space.

NASA's Aqua satellite captured this image of the lakes on the early afternoon of Feb. 19, 2014. At the time, 80.3 percent of the five lakes were covered in ice, according to the Great Lakes Environmental Research Laboratory (GLERL), part of the National Oceanic and Atmospheric Administration.

Earlier this month, ice cover over the Great Lakes hit 88 percent for the first time since 1994. Typically at its peak, the average ice cover is just over 50 percent, and it only occasionally passes 80 percent, according to NASA's Earth Observatory. [Earth from Above: 101 Stunning Images from Orbit]

Cold temperatures that have persisted in the region are largely responsible for this year's thick layer of ice, but cryospheric scientist Nathan Kurtz, of NASA's Goddard Space Flight Center, told the Earth Observatory that "secondary factors like clouds, snow and wind also play a role." And some lakes are more frozen than others. While the ice cover over Lake Erie, Lake Superior and Lake Huron is approaching 100 percent, Lake Ontario is only around 20 percent frozen and Lake Michigan is about 60 percent covered, according to the latest update from GLERL.

NASA researchers also put together a false-color image combining shortwave infrared, near infrared and red wavelengths to pick out ice from other elements that look white in visible-wavelength images like snow, water and clouds. In this image, ice appears pale blue, and the thicker it is the brighter it looks. Open water, meanwhile, is shown in navy, snow is blue-green and clouds appear either white or blue-green, according the Earth Observatory.

The ice could have environmental effects on the surrounding region.

"The biggest impact we'll see is shutting down the lake-effect snow," Guy Meadows, director of Michigan Technological University's Great Lakes Research Center, explained in a statement. This "lake-effect" snow usually gets dumped on the region when weather systems from the north and west pick up evaporating lake water. The ice cover is reducing evaporation, but that could be a good thing for the Great Lakes, which experienced record low water levels last year.

In another plus, the ice is thick enough over Lake Superior for visitors to reach the Apostle Islands' ice caves for the first time since 2009. And Meadows said the ice could also protect the spawning beds of whitefish and some other fish species from winter storms.

History Of The Hyperlink?

Is your phone eavesdropping on you?
View CBS News In
CBS News App Open
Chrome Safari Continue
Be the first to know
Get browser notifications for breaking news, live events, and exclusive reporting.