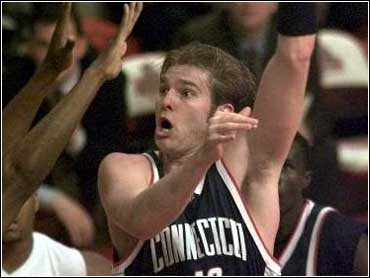 Khalid El-Amin is starting to specialize in last-minute heroics for No. 24 Connecticut.

Just two days after hitting a game-winning basket at the buzzer against West Virginia, El-Amin hit four free throws and made a game-clinching steal in the final 26.1 seconds as the Huskies held off Rutgers 74-69 Monday night.

The two straight wins allowed the defending national champions to survive a month in which they went 5-4 and saw three players suspended for violations of team rules. Starting junior forward Edmund Saunders was suspended for this game. Freshman Doug Wrenn returned from suspension, but did not play.

El-Amin didn't want to talk about his heroics after Connecticut (20-8, 9-6 Big East) clinched its seventh straight 20-win season while sending Rutgers (15-13, 6-9) to its ninth loss in 12 games decided by six or less points.

"It just feels great to get the win," said El-Amin, who had 11 points and six assists.

What he would talk about was his steal against Rutgers freshman point guard Todd Billet, just seconds after Rutgers called a timeout while trailing 72-69 with nine seconds to play.

Billet took the inbounds pass and was looking for Dahntay Jones coming off a screen for a 3-point attempt. Jones, who scored 25 points, had hit a long 3-pointer to narrow the Huskies lead to 70-68 with 15.9 seconds to play.

Tony Robertson made two free throws for Connecticut after being fouled with 13.8 seconds remaining to push the lead to 72-69.

Then came the inbounds play. Billet caught the pass and started to dribble. Out came El-Amin's hand to swipe the ball away.

"It was an anticipation type of thing," said El-Amin, who iced the game with two free throws. "I saw the ball right there ifront of my face and was able to hit it and wrestle it away from him."

While Billet said he would not let the play bother him, his eyes looked red and watery.

"We were looking for a 3 and they got a steal, that's all I'm going to say about that play," Billet said.

Rutgers coach Kevin Bannon said it was too bad it had to end that way.

"All I can do is take my hat off to Khalid, he made a good individual play," Bannon said. "I don't think Todd made a bad play. Khalid made a good play. It's just a shame Todd is very broken up about it."

The Scarlet Knights stayed close and used a 6-0 run to get to 60-58 with eight minutes remaining. Rutgers blew a few chances to tie, the best when Rashod Kent missed the front end of a 1-and-1 with 7:16 to play. Rutgers was 9-of-16 from the foul line in the half.

A jumper by Joel Salvi and a free throw by Jeff Greer to get Rutgers to 68-66 with 33.2 seconds left, but El-Amin hit two free throws with 26.1 seconds left to restore a four-point lead.

In the first half, Connecticut didn't play like a team that lost four of its last seven and had three players suspended for violations of team rules.

The defending national champions only trailed in the opening moments and took a 43-30 halftime lead by shooting 64 percent from the field while outrebounding the Scarlet Knights 19-10. Six of Connecticut's first 10 points came off offensive rebounds.