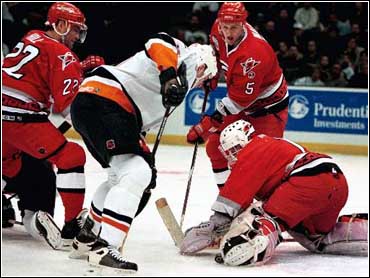 Ron Francis hasn't played his entire career with the Carolina Hurricanes. It only seems that way.

Francis' 15th goal of the season and 300th with the team came with 2:31 left Tuesday night, giving the Carolina Hurricanes a 4-3 victory over the New York Islanders.

"It's nice to get 300 with the franchise," said Francis, who also played for the franchise when it was the Hartford Whalers. "But it's nicer to get the two points. We need these points."

Francis has spent 12 of 19 seasons with the Hartford/Carolina franchise.

Francis wristed the puck over goalie Roberto Luongo's glove to give the Hurricanes their first road victory in six games (1-5-0).

"We need these points and they don't," Carolina forward Rod Brind'Amour said. "If we didn't get the win, especially with the way we dominated the shots, it would have been pretty disappointing."

Islaners goalie Kevin Weekes made 33 saves before leaving early in the third period because of muscle cramps. Luongo made 12 saves.

"It's not easy at all," Luongo said. "You have to be focused like you were going to play every game, but just being thrown in there is not easy, especially since Kevin was playing well."

Daniels gave the Hurricanes a 1-0 lead at 4:10 of the first period at the end of his own four-shot flurry at Weekes, who stopped the first three chances before accidentally knocking the puck over the goal line with his arm.

Gelinas capped a 3-on-2 break by tapping in Paul Coffey's perfect cross-ice pass at 8:38 to give Carolina a 2-0 lead.

Czerkawski scored on a power-play goal at 13:00, flipping in a close-range shot while falling. The Islanders, who have the league's second-worst power play (23-for-201, 11.0 percent), have scored at least one man-advantage goal in a season-high five straight games.

Kovalenko restored Carolina's lead at 5:05 when he finished off a 2-on-none break with Brind'Amour by flipping the puck over Weekes. Lapointe tied it with 2:09 left in the period, tipping in Gino Odjick's wrist shot from the right point.

The Islanders killed off a two-man disadvantage for 92 seconds at the end of the second period.

"We had to score there, really," Brind'Amour said. "By not doing so, that could have tipped the scales in their favor."

"I didn't think that was a problem," Maurice said. "We were getting a lot of shots on net."