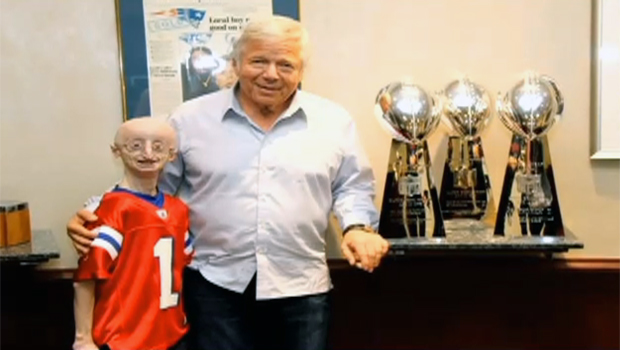 Sam Berns' high school classmates also were bused to the services at a synagogue in Sharon. A private reception was held later at Gillette Stadium in Foxborough, Berns' hometown.

Berns, 17, died Friday of complications from Hutchinson-Gilford progeria syndrome, commonly known as progeria. He was diagnosed with progeria when he was 22 months old. His physician parents founded the nonprofit Progeria Research Foundation after his diagnosis.

Berns became the subject of an HBO documentary, "Life According to Sam." The exposure has brought greater recognition to the condition, which causes musculoskeletal degeneration, cardiovascular problems and other symptoms associated with aging.

Kraft met the young sports fan and attended the HBO premiere of the documentary in New York in October. Kraft made a $500,000 matching pledge to the foundation.

The Boston Globe reported that Berns was invited to a Patriots practice that month, and gave the players an impromptu motivational speech.

Kraft said after Berns' death that he had invited the teen to be the Patriot's honorary captain for Saturday night's playoff game in which they defeated the Indianapolis Colts.