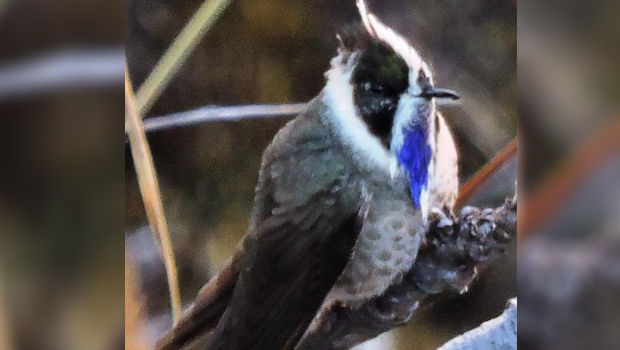 Conservationists Carlos Julio Rojas and Christian Vasquez had gone into a Columbian mountain range looking to document fires burning in the fragile ecosystem.

They ended up rediscovering a hummingbird that had not been seen since 1946 and was believed to have gone extinct.

The duo earlier this month managed to snap the only known photographs of the blue-bearded helmetcrest.

As he hiked through the region's Sierra Nevada de Santa Marta National Park, Rojas said he "saw the flash of a bird screeching past me and saw it perch on a bush nearby."

"I managed to take a quick photo of it before it flew off. I then reviewed the photo on the camera screen and immediately recognized the strikingly patterned hummingbird as the long-lost blue-bearded helmetcrest," said Rojas, whose discovery was first reported in the journal ProAves. "I was ecstatic. After reports of searches by ornithologists failing to find this spectacular species, Christian and I were the first people alive to see it for real."

The bird is known for its prominent crest and elongated throat feathers forming what looks like a beard, according to Birdlife International. In the center of the beard are metallic purplish-blue feathers, and the tail has an extensive buff-white area.

The duo then set up camp in the area and spent the next two days searching for more signs of the birds. They managed to spot three birds in what Vasquez described as "in an area of less than 10 hectares [25 acres] with three scattered tiny patches of forest clinging to the steep hillsides and surrounded by the remains of burnt vegetation."

Found only the Santa Marta region of northeast Colombia, the bird had seen its numbers drop due to habitat loss caused by deforestation, overgrazing from herds of cattle and extensive burning by the Kogi indigenous people for farming. Some 50,000 indigenous people, mainly Kogi and Arhuacos, live in the area. In 2014, the journal Science identified Sierra Nevada de Santa Marta National Park as the world's most important protected area for the conservation of threatened terrestrial species.

Despite the exciting discovery, Rojas and Vasquez warned the bird's future remains clouded.

The species is dependent on stunted forest and bushes amongst natural páramo grasslands - habitat that is highly susceptible to fires during the dry season. The situation is even more difficult because the flowering plant the helmetcrest depends on - the Santa Marta Frailejon (Libanothamnus occultus) - is itself threatened by persistent fires and has also been declared critically endangered.

"Sadly the survival of the blue-bearded helmetcrest hangs by a thread," Rojas said. "The impacts of fire are everywhere with the charred remains of plants littered across the páramo. It is crucial that the fires are stopped immediately and that cattle and pigs are removed from the highest elevations to allow the fragile páramo ecosystem to recover before this unique hummingbird and its equally rare food plant become extinct."

The discovery is the second in a month of a bird that ornithologists believed had gone extinct. In early March, scientists announced that the Jerdon's babbler (Chrysomma altirostre) had been rediscovered. It had not been seen since 1941.