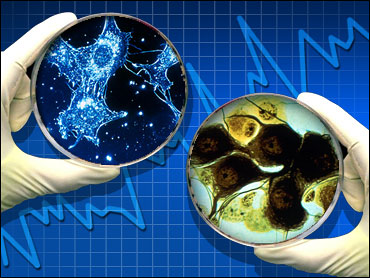 On the sun-splashed Caribbean island of St. Kitts, Yale University researchers are injecting millions of human brain cells into the heads of monkeys afflicted with Parkinson's disease.

In China, there are 29 goats running around on a farm with human cells coursing through their organs, a result of scientists dropping human blood cells into goat embryos.

The mixing of humans and animals in the name of medicine has been going on for decades. People are walking around with pig valves in their hearts and scientists have routinely injected human cells into lab mice to mimic diseases.

But the research is becoming increasingly exotic as scientists work with the brains of mice, monkeys and other mammals and begin fiddling with the hot-button issue of cloning. Harvard University researchers are attempting to clone human embryonic cells in rabbit eggs.

Such work has triggered protests from social conservatives and others who fear the blurring of species lines, invoking the image of the chimera of Greek mythology, a monstrous mix of lion, goat and serpent.

During his State of the Union speech in January, President Bush called for a ban on "human cloning in all its forms" and "human-animal hybrids," labeling it one of the "most egregious abuses of medical research."

He didn't elaborate, but scientists working in the field believe that by "hybrids," the president meant creating living animals with human traits - something they say they aren't doing.

Other critics are calling for stricter regulations of the research.

"The technology is advancing quicker than the regulations," said Osagie Obasogie of the Oakland-based Center for Genetics and Society, which opposes the mixing of human and animal cells.

But scientists say the ethically charged work will help them better understand disease and hopefully cure some illnesses. They argue their work will never result in the birth of any living being, but lets them experiment with human disease without using people.

"The president touched on a nerve that we all feel," said Doug Melton, the Harvard researcher trying to eliminate the need for women to donate their eggs for cloning research by creating human embryonic stem cells in rabbit eggs.

"The prospect of having animals that are chimeras is frightening. This is not that kind of research. These experiments don't make animals, they make cells."

Melton's work, if successful, would reduce the need for female donors, who have to take fertility drugs to increase their egg production and undergo invasive procedures to extract the eggs. But he has not yet succeeded in extracting human stem cells from the cloned rabbit eggs.

United Kingdom researchers led by Dolly the Sheep creator Ian Wilmut are planning similar experiments, which aim to copy a Chinese research team's success with goats, reported in the journal Cell Research in 2003.

"The concerns about chimeras and mixing species may be justified in some circumstances," Yale researcher Gene Redmond said by e-mail from his St. Kitts laboratory, where he's studying Parkinson's disease by injecting human brain cells into monkeys. "But there are strong scientific reasons to do it in many cases and great benefits to be had for humanity."

Redmond's work is funded by the U.S. government, but he works in St. Kitts because it and the neighboring island of Nevis have a large population of feral African monkeys. The research aims to reverse the symptoms of Parkinson's by supplying dopamine, a chemical in the brain whose absence is thought to cause the disease.

"There seems to be little or no chance that the monkeys would be 'humanized,"' because of the relatively few and highly specialized human cells that are being implanted, Redmond said.

Still, it's research like Redmond's that upsets critics the most.

Stanford University bioethicist Christopher Scott said "the stuff that raises the most ethical concerns" are the experiments that implant human cells into animals' brains.

So far, Scott and others know of no researcher that has come close to putting enough human cells into animal brains to confer any signs of humanity, such as emotion.

In December, for instance, Parkinson's disease researchers at the Salk Institute in San Diego reported they had created mice with .01 percent human cells by injecting about 100,000 human embryonic stem cells per mouse, a trace amount that didn't remotely come close to "humanizing" the rodents.

Most scientists also argue that the "architecture" of animals' heads couldn't support a brain of mostly human cells. The animals are also wired differently and couldn't survive with a human brain.

Still, there's enough concern about human-animal mixing that the influential National Academy of Sciences addressed it last year when it issued guidelines for stem cell research.

The report endorsed research that co-mingles human and animal tissue as vital to ensuring that experimental drugs and new tissue replacement therapies are safe for people. But the report warned that the "idea that human neuronal cells might participate in 'higher order' brain functions in a nonhuman animal, however unlikely that may be, raises concerns that need to be considered."

The report recommends that each institution involved in stem cell research create a formal, standing committee to specifically oversee the work, including experiments that mix human and animal cells.

Drawing ethical boundaries that no research appears to have crossed yet, the Academies recommend a prohibition on mixing human stem cells with embryos from monkeys and other primates. But even that policy recommendation isn't tough enough for some who advocate for formal regulations.

"You don't want a monkey with 95 percent of its brain cells being human," said Obasogie of the Center for Genetics and Society, "and to ensure that takes more than a recommendation."