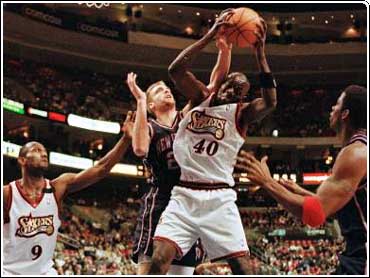 Every time they lose at the buzzer, the New Jersey Nets say it was a freak accident. Maybe they're just an accident waiting to happen.

Larry Hughes showed the Nets yet another twisted way to lose Wednesday night, tapping in a rebound at the buzzer as the Philadelphia 76ers beat New Jersey 92-90.

"Bizarre? Are you kidding?" said Don Casey, whose last words before the All-Star break were screamed at referee Tim Donaghy in the hallway of the First Union Center. "The last two weeks defy the job description."

The Sixers came back from a 21-point first-half deficit, then capped a frantic finish after Stephon Marbury got called for a rare 10-second violation with the score tied at 90 in the final seconds.

"I don't think I've seen one of those, ever, in the league," said Philadelphia's Allen Iverson, who had 41 points.

Keith Van Horn gave New Jersey a 90-87 lead with a 3-pointer with 30.5 seconds left. Iverson answered with a double-clutch 3-pointer of his own to set up the confusing finish.

Marbury walked the ball up for a chance at the win, but didn't get to halfcourt in 10 seconds. Two Sixers Theo Ratliff and Eric Snow said they heard Nets coach Don Casey calling for a timeout and Marbury saying, "No, I've got it." The Nets argued, then went to their huddle in disarray.

"A freak play," said Marbury, shaking his head. "This has been a freak first half."

A confused Iverson said, "I had no idea what was going on. You rarely see that call. or the referees to be professionals and make the call, that says a lot about them guys."

Iverson, who scored 40 for the third time in four games, drove for a hanging jumper that missed. Ratliff missed a tap-in, but Hughes soared in and tipped it in as time expired.

Casey, who said he wasn't calling for a timeout, realized it was a good call. The Nets inbounded the ball with 22.7 seconds left and were called for the violation with 12.7.

Casey was less forgiving about an earlier reversal that took two points off the scoreboard for the Nets.

The New Jersey coach went ballistic when a goaltending call on Ratliff was changed to a jump ball. The basket on a shot by Marbury would have given the Nets an 81-75 lead with less than five minutes to play. Instead, the Sixers went on a 6-2 run and tied it at 81.

"I blocked his shot a couple of times the same way toward the end of the game," said Ratliff, who had 10 points, 10 rebounds and five blocks.

But Casey was seen and heard screaming at the Donaghy, the ref who reversed the call, as he walked through the hallway to the team bus.

"Even Larry Brown thought it was the right call," Casey shouted, meaning the original goaltending call.

"You can't rely on those guys," Casey told reporters. "If so, I'd be back cutting grass in San Diego."

It was all just another bizarre night at the office for the Nets, who lost back-to-back games on baskets at the buzzer during a recent seven-game losing streak.

"Every which way to lose, we've lost," said Kendall Gill, who led the Nets with 21 points. "Maybe now it'll turn around."

Marbury had 17 points and nine assists, but played only 35 minutes due to foul trouble.

Iverson shot 15-for-28 and made all 10 of his free throws, and Snow had 12 points and 14 assists. Hughes, who will compete in the slam dunk contest at All-Star weekend, made only two of eight shots for four points. The Sixers have been trying to trade him for weeks.

"I stopped worrying about it," Hughes said of the trade rumors. "I'm concerned with going and kind of getting away from the business of the game."