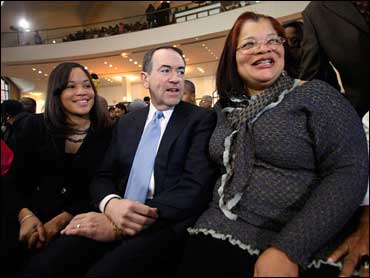 This column was written by Eve Fairbanks.

Even though he lost South Carolina, Mike Huckabee's running about even with Rudy Giuliani and John McCain in fluid Florida. Those who predict he still has a chance to be, at least, a convention kingmaker point to the delegates he can rack up in Southern states on February 5: Lots of evangelicals in those states = lots of votes for Mike Huckabee.

But South Carolina showed this math doesn't work. In fact, I'd hazard a guess that the more evangelicals a February 5 state has, the less well among them, proportionally, Huckabee will do.

Exit polls Saturday night counted 60 percent of the primary electorate as "born-again" or "evangelical" Christians. South Carolina is intensely religious, a seemingly perfect vehicle for the Huckabee evangelical strategy: Just turn out a lot of 'em, and evangelical identity politics dictates that they'll mostly vote for you.

This particular stat surprised me. As a reporter pre-South Carolina, it was really easy to get a false impression of the depth of evangelical support for Huckabee there. What's the easiest way to report out the evangelicals' interest in a candidate? Call some pastors! After all, their phone numbers can be Googled, while there's no handy directory for lay believers. But it turned out the pastors didn't really represent the attitude of their flocks.

I did my own version of the pastor poll down in South Carolina. The afternoon a huge pastor's conference in Columbia ended, I stood outside the building as finely dressed pastors of all ages and races trickled from the doors. "Who's your candidate?" I would ask each little cluster that walked by. The shout would almost always come: "Huckabee!" Four out of five pastors I asked favored Huckabee; the rest weren't generally supporters of another candidate but just didn't want to say for whom they were voting.

Later, I asked two South Carolina evangelical leaders to explain the discrepancy between my informal survey outside the pastors' conference (revealing huge excitement for Huckabee!) and a Thursday poll in Columbia's The State, which, surprisingly, showed evangelicals still undecided and a good proportion of them leaning towards McCain. "I think [Huckabee] is stronger among pastors, but lay evangelicals are still struggling," Frank Page, the head of the Southern Baptist Convention, told me. Mike Hamlet, the quite political pastor of the immense First Baptist North Spartanburg - his office sports the Order of the Palmetto award he won from Governor Mark Sanford and a framed American flag - had a different theory. The respondents favoring other candidates, "they're not real evangelicals. If people say, 'I like [Huckabee] because of Scripture, but I don't like his tax policy,' they are not reflecting an evangelical lifestyle." Hamlet defines "real" evangelicals as people whose votes rest on sanctity of life, character, and a candidate's interest in the Judeo-Christian ethic more than "lower issues" like immigration or terrorism.

Page's and Hamlet's answers were framed differently, but they're actually the same. The evangelical community in South Carolina is so big - 60 percent! - that it functions more like a microcosm of the Republican pool than as a bloc that behaves differently. Evangelicals in South Carolina aren't a smaller, ridiculed (and therefore bonded) subset keen to assert their power by turning out en masse for a candidate. On the contrary -- it's actually trendy in South Carolina to call oneself an evangelical.

If Rudy Giuliani had been a bigger player, it might have all been different. Oran Smith is the head of a pro-family organization in Columbia and, decked out in his hip Banana Republic-esque khaki zip-up and neon orange tie, a good representative of a younger generation of evangelicals starting to take the helm of the movement. He put it to me this way:

In other words, if more candidates had been pro-choice, hostile to religion, and exhibited other red-flag issues for evangelicals, a protective or boosterish instinct would have incited more voters to vote for Huckabee. But the era of the Rockefeller Republican is over. Huckabee just doesn't make enough of a contrast with the other candidates on the Christian-ness of his positions, only on the Christian-ness of his personal identity. Saturday showed the limits of evangelical identity politics in the South.

If Giuliani cleans up in Florida and starts to look like a threat, I think that will really help Huckabee in Southern states - the lion will be on the rise. But otherwise, don't expect Huckabee to do as well as the raw percentage of evangelicals in a Southern state suggests he might. The bigger the evangelical community, the more likely their votes are to mirror everybody else's.
By Eve Fairbanks
If you like this article, go to www.tnr.com, which breaks down today's top stories and offers nearly 100 years of news, opinion and analysis