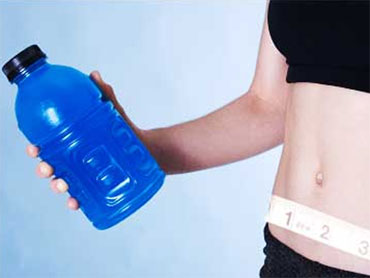 Recently on "The Early Show," I discussed a study from the journal, Pediatrics, about teens and consumption of "sweet" beverages. The study found that adolescents who drank soda were less likely to participate in sports or gym and more likely to eat unhealthy foods.

The study also found that teens who drank "fruit-sweetened beverages" like sports drinks or drinks marketed as containing fruit were MORE likely to be active and to eat healthy foods (possibly because of successful marketing of an athletic, healthy image associated with these beverages).

As a mom of an 11-year-old daughter and a 12-year-old son, I appreciate how difficult it can be to steer a child away from these sweet drinks and towards healthier options like water or milk. Sometimes I find myself rationalizing or excusing their consumption of these drinks by saying 'Well, they play sports, and they don't have a weight problem, so one can't hurt.' While true, it's not the single, isolated drink that concerns me; it's the habit of having one a day (which can lead to 13-15 pounds of weight gain per year) that is the problem.

These beverages are being looked at by some experts (myself included) as almost a "gateway to obesity" as much as smoking is considered a gateway to drug use. In some ways this sounds harsh, but in reality, I see far too many adult patients struggling with their weight because they are conditioned to drink their calories.

Other than one cup of coffee a day and the occasional glass of wine, adults would do better with weight issues if they drank only liquids (like water or seltzer) that had no calories. As a parent, I am trying to get my kids into the same habit; they drink milk (or milk shakes for protein) and water during the day. When they are participating in athletic games (not practices), they are allowed to have a sports drink that has been diluted with water.

My hope is that they will learn the concept of "not drinking their calories," but also recognize that once in a while, in moderation, drinks with flavoring can be enjoyed. I try to lead by example and practice what I preach where this is concerned. I feel that a major reason why I have been able to maintain a healthy weight and a BMI (body mass index) of 19 is because I never got into the habit of drinking sodas, juice or sweet drinks. I hope my children learn the same healthy habit, since two-thirds of American adults are overweight or obese, and I hope they do not become part of that statistic in the future.