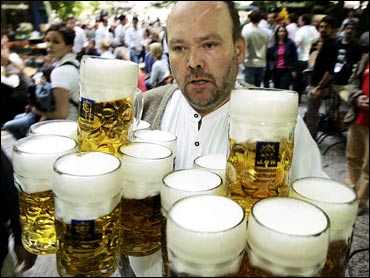 For many men, a finding by Oregon researchers sounds too good to be true: An ingredient in beer seems to help prevent prostate cancer, at least in lab experiments.

The trouble is that you'd theoretically have to drink about 17 beers a day for any potential benefit. And no one's advising that.

Researchers at Oregon State University say that the compound xanthohumol, found in hops, inhibits a protein in the cells along the surface of the prostate gland. The protein acts like a switch that turns on a variety cancers, including prostate cancer.

Dr. Richard N. Atkins, CEO of the National Prostate Cancer Coalition, said the experiments are encouraging and "perhaps men could take it in pill form someday."

He noted an ingredient in tomatoes, lycopene, has previously been linked to prostate cancer prevention.

"It's every man's dream to hear that beer and pizza can prevent cancer," he said. "However, the 17 beers and four large pizzas needed to get enough xanthohumol and lycopene to help prevent prostate cancer is unfortunately not advised."

Atkins noted that drinking 17 beers a day can lead to alcoholism and cirrhosis of the liver, while overdoing the pizza can lead to obesity and other health problems.

"Food, no matter how helpful it may be, is not a full preventive for prostate cancer," he said.