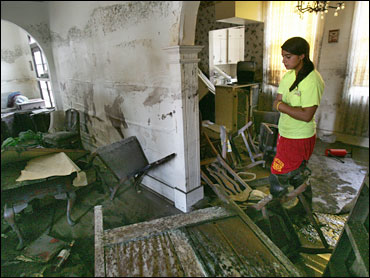 As floodwaters recede from New Orleans' hard-hit east side, a grim scene of destruction has been revealed: Block after block of once-flooded neighborhoods are covered in a slimy, putrid muck and dotted with ruined cars, snapped utility poles and collapsed houses.

Although the cleanup will likely take months, Mayor Ray Nagin said that parts of the city will reopen early next week and the tourist-friendly French Quarter the following week after the Environmental Protection Agency said the foul-smelling air in the city was not overly polluted.

Nagin said he expects about 180,000 people to return to the city within a week or two, when power and sewer systems are restored. Some retailers should be operating by then, as well as two hospitals.

"To anyone who even suggests that this great city should not be rebuilt, hear this, and hear it well, we will rebuild," declared Louisiana Gov. Kathleen Blanco.

Blanco pledged a united effort to rebuild areas ravaged by the storm.

"We all know that there were failures at every level of government: state, federal and local. At the state level, we must take a careful look at what went wrong and make sure it never happens again. The buck stops here, and as your governor, I take full responsibility," Blanco told lawmakers in a special meeting of the Louisiana Legislature.

The most obvious sign of progress has come from the lights flickering on. About 168,000 customers were still without power in the New Orleans area, mostly in places still flooded, but that number has gone down 10,000 in a day.

The Hibernia Corp., Louisiana's oldest bank, whose landmark building was once the city's tallest, turned on its lights at sunset Wednesday. The bank is well-known for the colors that light up the building's cupola during the holidays.

"This is two weeks and two days after the hurricane hit and I am really astounded by the progress I see already," Kurt Weigle of the New Orleans Downtown Development District told CBS News Correspondent Steve Futterman. "People love this city, and I think they're going to want to come back and see us. They're going to want to support us."

About 40 to 50 percent of the city was still flooded, down from 80 percent after Katrina hit, as pumps worked to siphon off 8 billion gallons a day.

Recovery efforts continued in Mississippi, where Gov. Haley Barbour said officials would offer some evacuees room aboard a small cruise ship moored off the Gulf coast.

Barbour called the lack of temporary housing for evacuees the state's largest problem, but he did not provide a timetable or other details about the 490-passenger vessel.

"This is a small solution," Barbour told a news conference. "We are going to look at base camps and modular cities, if you will. But I just want to say to you we are not where we need to be on temporary housing."

He said about 2,000 travel trailers and mobile homes are en route to storm-damaged areas of Mississippi but most are still in staging areas, and fewer than 250 were ready for occupancy.

In Thursday's editions of The New York Times, the former director of the Federal Emergency Management Agency criticized Blanco's response to the hurricane, describing widespread confusion in Louisiana.

Michael Brown said he made repeated phone calls to the secretary of Homeland Security and the White House warning of the problems.

"I truly believed the White House was not at fault here," said Brown, who resigned under fire over the government's sluggish response to the disaster.

Early Show co-anchor Harry Smith (video)
that, while the laws and custom give governors the lead in emergencies such as this, the Bush administration did consider stepping in.

"About 24, 48 hours after the storm had hit and when the flooding really happened and we were having the problems with security in New Orleans, we were debating within the administration of invoking a very rare act, the Insurrection Act, to try to bring some chain of command structure to the effort," Bartlett said.

In Washington, Senate Republicans scuttled an attempt by Sen. Hillary Clinton to establish an independent, bipartisan panel patterned after the 9/11 Commission to investigate what went wrong with the government's response to the hurricane.

Separately, a Senate committee opened a hearing on the disaster, with the panel's Republican chairwoman saying that changes instituted after Sept. 11 in the government's emergency-preparedness failed their first major test during Katrina.