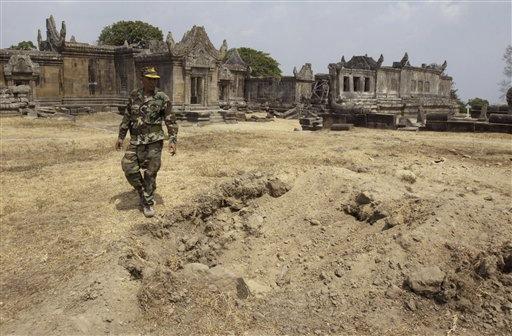 The stone remains of Preah Vihear, built nearly 1,000 years ago, are supposed to be a protected U.N. World Heritage site. Instead they are at the heart of a dangerous tug-of-war between Cambodia and Thailand - one that has taken at least eight lives and forced 15,000 to flee in four days of clashes recently.

The battle over a hilly patch of land in this remote countryside is rooted in a decades-old border dispute that has fueled nationalist passions and been driven by domestic politics and conspiracy theories on both sides.

A fragile truce has held since Monday night, but the dispute remains unsettled, and troops are digging in for another round of combat.

The Cambodians filled fresh sandbags earlier this week, stacking them meticulously in 10 bunkers along one of the temple's low outer walls. It looks out over a ravine toward Thailand's sandbagged foxholes on the other side.

"We're just praying in our hearts for this to be over," said Hun Demong, a Buddhist monk who fled into a Cambodian army bunker after the fighting broke out on Feb. 4. "We only hope it will not start again."

With ornamental panels dedicated to the Hindu deity Shiva, Preah Vihear was a stunning achievement of the Angkorean empire, whose realm once took in parts of modern-day Thailand and Vietnam.

When the latest firing stopped, the great stone temple itself stood as a silent victim, small chunks of its darkened gray walls blown off by shrapnel from shells fired from Thailand.

The tail of an exploded rocket lay at the feet of a squatting Cambodian soldier atop the 160-step stairway at the temple's entrance. Along a stone causeway leading farther into the complex, an empty gun battery looked out over a charred hillside, its shredded trees and gnarled saplings bearing testament to the ferocity of the fighting.

A pool of dried blood spattered the floor under a sandstone archway, the spot one mortally wounded soldier was carried to by comrades after being hit by an artillery blast.

There is no simple answer to what sparked the latest fighting.

The temple has been the subject of an intense boundary dispute since French colonial forces withdrew from Cambodia in the 1950s.

In 1962, the International Court of Justice ruled the cliff-top structure was inside Cambodia. However, sovereignty of the land surrounding it - an area less than five square kilometers (two square miles) - has never been resolved.

Tensions rose in 2008 after UNESCO accepted Cambodia's bid to list the temple as a World Heritage Site - a move that stirred nationalist outrage and protests in Thailand.

Since then, armies from the two nations have clashed five times; the latest battle, the most intense and sustained so far, was the first time artillery and mortars were used.

"I don't know what started it, but both sides are edgy, self-righteous and heavily armed," said David Chandler, a Cambodia expert at Monash University in Australia.

In Bangkok, the Thai capital, the so-called Yellow Shirt protesters have launched a sit-in outside government buildings, in part to demand the country take a tough stand on Preah Vihear. The group is widely seen as playing the patriotism card in a bid to exercise more influence over politics at home.

Amid the fighting last weekend, Cambodia wrote to UNESCO condemning the damage caused by Thai artillery and rockets, which hit some walls and snapped steel belts helping to hold up fragile archways but don't appear to have caused major structural damage.

Thailand's foreign minister shot back with his own letter to the U.N. body, warning that Cambodia's use of the area as "a military base ... would expose the temple to grave danger and destruction."

Gen. Chea Tara, who commands the Cambodian troops at the temple, defended their presence.

"If we were not here to defend it, Thailand would overrun it," he told The Associated Press. "Our objective is only to protect our land. We do not want war."

UNESCO director-general Irina Bokova said she would send a mission to assess the situation. Thailand opposes the visit, saying it will make the situation worse.

Even if there is no more combat, the presence of the Cambodian army, which has patrolled the temple complex for at least two years, risks degrading the site further.

Beside a "Do Not Touch" sign, one Cambodian soldier lay on a hammock tied to heavy wooden beams meant to keep the temple's stone pillars from falling.

Some troops squatted in stone windows, flicking ashes below. Dozens sat on temple ledges, cooking rice and laying meat on stone slabs to dry. A few bathed with jugs of water at the foot of what was once a luxurious pool, now stacked with green crates of ammunition. Gas-powered generators powering cell phones and radios hummed.

Cambodia had hoped Preah Vihear would attract more tourists to the impoverished nation. It was built about 100 years before the country's famous temples of Angkor Wat, just a few hours up the road and crowded with hordes of camera-snapping tourists.

Preah Vihear gets only a handful of visitors - and none now.