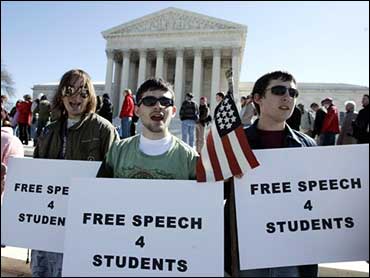 A high school principal was acting reasonably and in accord with the school's anti-drug mission when she suspended a student for displaying a "Bong Hits 4 Jesus" banner, her lawyer told the Supreme Court Monday.

"The message here is, in fact, critical," the lawyer, former independent counsel Kenneth Starr, said during a lively argument about whether the principal violated the constitutional rights of the student.

On the other side, attorney Douglas Mertz of Juneau, Alaska, urged the justices to see the case as being about free speech, not drugs.

The dispute between Joseph Frederick, who in 2002 was a high school senior, and principal Deborah Morse has become an important test of the limits on the free speech rights of students.

Justice Stephen Breyer, addressing Mertz, said he is struggling with the case because a ruling in Frederick's favor could encourage students to go to absurd lengths to test those limits.

A ruling for Morse, however, "may really limit free speech," Breyer said.

The Bush administration, backing Morse, wants the court to adopt a broad rule that could essentially give public schools the right to clamp down on any speech with which it disagrees.

Scores of students waited outside the court early Monday for a chance to listen to the arguments.

"I would never do it, but at the same time, it's free speech," said Chaim Frenkel, 17, of Silver Spring, Md. Frenkel was one of 13 seniors and their teacher from the Melvin J. Berman Hebrew Academy who arrived at the court at 4:30 a.m. EDT.

Natasha Braithwaite, 20, a junior at Columbia Union College in Takoma Park, Md., got in line at 7 a.m. with a definite opinion about the case. "In every possible way, his First Amendment rights were violated," Braithwaite said.

Frederick was a high school senior in Juneau when he decided to display the banner at a school-sanctioned event to watch the Olympic torch pass through the city on its way to the 2002 Winter Games in Salt Lake City.

Morse believed his "Bong Hits 4 Jesus" banner was a pro-drug message that schools should not tolerate. She suspended Frederick for 10 days. Frederick sued Morse, and that case now is before the court.

Frederick acknowledged he was trying to provoke a reaction from school administrators with whom he had feuded, but he denied that he was speaking out in favor of drugs or anything other than free speech. A bong is a water pipe that is used to smoke marijuana.

"I waited until the perfect moment to unveil it, as the TV cameras (following the torch relay) passed," Frederick said.

Morse and the Juneau school district argue that schools will be powerless to discipline students who promote illegal drugs if the court sides with Frederick. The Bush administration, other school boards and anti-drug school groups are supporting Morse.

Frederick, now 23, counters that students could be silenced if the court reverses the appellate ruling. A wide assortment of conservative and liberal advocacy groups are behind Frederick.

"What we've seen is schools overextending their power over students through zero tolerance policies," said John Whitehead of the Rutherford Institute. "And what's happened is it has completely decimated our First Amendment."

CBS News correspondent Barry Bagnato reports it is a fascinating case that gives the high court a chance to revisit rulings that grew out of the protest years of the 1960s. In a Vietnam War-era case, the court backed high school student anti-war protesters who wore armbands to class. Since then, though, the court has sanctioned curtailing student speech when it is disruptive to a school's educational mission, plainly offensive or part of a school-sponsored activity like a student newspaper.

National School Boards Association lawyer Francisco Negron said he felt the key question is how come the principal is facing a lawsuit. "We think its rather severe to punish them personally for just acting in good faith and doing their job," said Negron.

A federal appeals court called Frederick's message "vague and nonsensical" in ruling that his civil rights had been violated. The 9th U.S. Circuit Court of Appeals also said Morse would have to compensate Frederick for her actions because she should have known they violated the Constitution.

Frederick, who teaches English and studies Mandarin in China, was not expected at the court for the argument. Two years after the banner incident, Frederick pleaded guilty to a misdemeanor charge of selling marijuana, according to Texas court records.