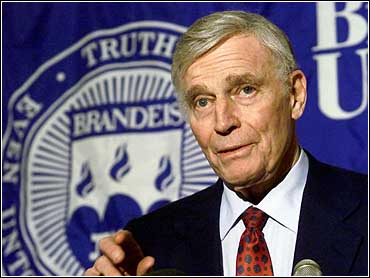 Charlton Heston's speech at Brandeis University attracted hundreds of protesters, including some who lay on the pavement, fake blood oozing from fake gunshot wounds.

"Political correctness is tyranny with manners," Heston told the crowd of about 700 students, administrators and members of the community in a speech at the university's student center Tuesday night.

The actor-turned-activist blasted the Clinton administration for pressuring Congress to enact new gun-control legislation while not enforcing the waht he said was 22,000 federal gun l;aws already on the books.

"You don't let America's universities serve as incubators for a rampant epidemic of this new brand of McCarthyism," he told students.

His speech was introduced as "Moses Comes To Brandeis," a reference to one of the roles in the Biblical epics that made Heston famous.

Before Heston's address, protesters - most of them students - chanted anti-gun slogans and waved signs outside during a rally sponsored by the American Jewish Congress, reports WBZ-TV's Beth Germano.

"The blood of innocents - children or adults - by the illegal, inadvertent and improper use of guns...is cause for revulsion," he said. "The Second Amendment was never meant to condone lawlessness."

Pro-NRA demonstrators were also on hand to air their views. Tim Labbe, 31, said he came to support Heston.

"I'm here to stand up for the rights of citizens to keep the Second Amendment," he said.

Security was tight at the university with metal detectors and bomb-sniffing dogs used to protect Heston, who waived his usual $30,000 speaking fee to champion the rights of gun owners.