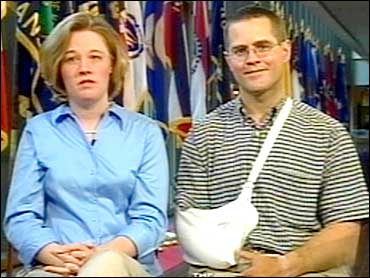 Nine days ago, U.S. Marine Capt. Jason Frei was in his utility vehicle in southern Iraq, overseeing 130 troops, when it was hit by a rocket-propelled grenade.

The attack cost him his right hand and severely injured his eardrum. He's recovering at the Naval Medical Center in Bethesda, Md., where he talked about his experience in an interview for The Early Show. He was joined by his wife, Valerie, and he talked to his mother via satellite.

He was very busy when the grenade hit, he said, and his first reaction was to be " a little bit perturbed because I didn't have time for this to happen.

"I looked down and saw my hand and figured out that I had been hit," he said. "And the first thing that went through my mind was, you know, getting the convoy stopped and making sure the Marines were taken care of. That anybody else was hit."

Because he was in the middle of a battle when injured, Frei was forced to remain on the battlefield, lying on his back for nearly two hours, while some of the 130 marines who served under him attended to his wounds.

"When I first got out of the vehicle," he said, "I looked down to see I had arterial bleeding coming out of my hand. I knew that was a bad thing so I had a radio cord that came down and I wrapped it around and right before I pulled it, I thought, 'This is going to hurt pretty bad.' I stopped the bleeding so I could concentrate on other things," he said. The next step for him was getting his unit into action.

He said the Marines who remain in Iraq are his heroes.

"They're the ones who are still doing the job, and you don't appreciate," he said. "They're 18-, 19, 20-year-old individuals, facing life-and-death situations. You don't appreciate how awesome they really are and the true sense of that word, until you're in combat. And I owe them my life. I hope that they're safe. And I would tell them, 'Keep fighting and doing your job.'"

Frei, 31, is a North Dakota natigve who now makes his home in California. He has two children, ages 2 and 3. His wife says she is just thrilled to have him back in the United States.

"At least I knew that he was coming home to his two children and I was getting my husband back, she said. "And he still continues to be a courageous United States Marine."

His mother Catherine Frei, remembers the little boy. "They often tell me that they're grown up now, you can let go, but it's hard to do," she said.

When she heard the news that her son had lost his right hand, she said, images of a 3-year-old Frei came to mind.

"I would picture him with his hand missing and then I would see him about 3 years old picking flowers, and handing them to me in his right hand. So those two things would just keep flashing through my mind," she said.

But after seeing her son with his wife via satellite, she said, "He looks great. He's a little thin, but other than that, you always want to fatten him up, you know."