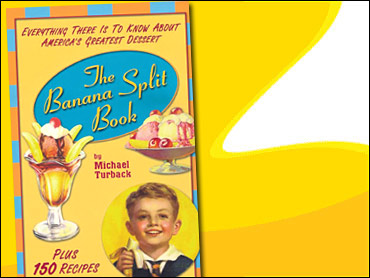 The banana split is about as all-American as baseball, apple pie and Chevrolet. In fact, July is national ice cream month, and every August, the 25th is observed as national banana split day. So you couldn't pick a better time than now to talk to Michael Turback, author of "The Banana Split Book."

The book outlines how in the summer of 1904, optometrist David Sticker took a banana, split it down the middle and topped it with three scoops of different flavors of ice cream. Next, "he added three dollops of fruit syrups, combining three mini-sundaes into one. The effect was startling."

The dish became so popular at the Latrobe, Penn., pharmacy where he worked, those who came to sample his invention spread word of the new discovery for miles and miles.

Turback tells The Early Show you can make a banana split with just about any ice cream. Nonetheless, a few things must remain constant: the Maraschino cherries, whipped cream, nuts, toppings and the almighty banana.

Turback shares recipes for the classic banana split and three other splits to illustrate how far the dish has come over the past century. Click on the links to get to the recipes:

Split 1 banana lengthwise and place the halves parallel on a round platter.
Place 1 large scoop of vanilla ice cream between the banana halves.
Cut 2 Krispy Kreme glazed doughnuts in half and place the pieces around the ice cream.
Ladle 2 ounces of hot fudge ( or chocolate sauce) over all, and garnish with raspberry whipped cream (raspberry puree folded into whipped cream).

Split 1 banana lengthwise and place the halves parallel on a Banana Split dish.
Place 1 scoop each of chocolate, strawberry, and pistachio gelato between the banana halves.
Ladle 2 ounces of chocolate syrup and 2 ounces of mixed-berry puree between the scoops of gelato.
Garnish with whipped cream, and place a whole cherry at the top.

(You can combine chocolate syrup with amaretto and garnish with an amaretti cookie instead of a cherry.)

Place a white chocolate brownie in the center of a round platter and top it with 2 scoops of Ben & Jerry's Chunky Monkey ice cream.
Ladle 2 ounces of chocolate syrup over one scoop and 2 ounces of caramel syrup over the other.
Split 1 banana lengthwise and press the halves against either side of the ice cream.
Garnish with whipped cream, and sprinkle with small pieces of pecan brittle.

(You can use hot fudge with this recipe instead of caramel syrup.)

About the author:
Michael Turback has lived most of his life in Ithaca, N.Y., where he owned and operated the award-winning restaurant Turback's. He is also the author of "A Month of Sundaes" released in 2002, and a food writer and wine judge.