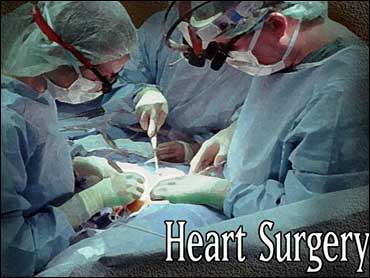 Heart bypass patients fare about the same no matter which of two surgery methods doctors use, concludes an American Heart Association review of more than four dozen studies.

The finding might help resolve a long-running debate over which bypass technique is best: the standard procedure of stopping the heart and using a heart-lung machine or the newer method of operating with the heart still beating.

"The bottom line is you can get a very good operation using either technique," said lead author Dr. Frank Sellke, of the heart association's Council on Cardiovascular Surgery and Anesthesia. "The advantages and disadvantages tend to be quite small when you compare one to the other."

He noted the cost is about the same for both.

The so-called "off-pump" operation, in which the still-beating heart is held by a device while the bypass graft is sewn in place, began to gain ground about 10 years ago.

"It's been debated quite vehemently for a number of years," said Sellke, also chief of cardiothoracic surgery at Beth Israel Deaconess Medical Center in Boston and professor of surgery at Harvard Medical School.

"Initially, we would have expected a lot better results with the off-pump," said Dr. Harold Urschel at Baylor University Medical Center in Dallas. "People are backing off of it now because there's not an advantage of using it in the standard case and it's a little harder for the surgeon."

In fact, President Clinton's heart surgery was done the traditional way, which is used on more than 75 percent of bypass patients. His heart was stopped for more than an hour and he was put on a heart-lung machine. That process carries a small risk of stroke and neurological complications.

However, Sellke said that research shows the difference in brain function in the two surgeries was slight and that when those problems do occur they usually disappear in three to four months.

The heart association's statement on the matter, published Tuesday in the journal Circulation, was based on a review of clinical trial data and other studies.

During a coronary artery bypass to relieve chest pain and reduce the risk of heart attack, a vessel from elsewhere in the body is sewn in to detour blood around blocked section of artery. There are about 300,000 such surgeries performed in the United States each year, Sellke said.

"It's a little harder to do the grafts off-pump," said Dr. Timothy Gardner, a co-author of the heart association statement and medical director of the Center for Heart and Vascular Health at Christiana Care Health System in Wilmington, Del. He said that people who undergo the on-pump surgery tend to have more grafts.

The patient benefiting the most from off-pump surgery is someone with a severely calcified or diseased aorta, the heart association said. Clamping a calcified aorta can cause a piece of the calcium to break off and give the patient a stroke, Sellke said.

Urschel said that at Baylor, about a third of the bypasses end up being done off-pump. In addition to patients with calcified aortas, the technique may also be used if the patient is high-risk and can't afford to lose too much blood.

Sellke said a more definitive answer on the superiority of one method over the other would require a large, carefully controlled study.

"The key is to try to figure out what might be the right operation for each individual patient," said Dr. Walter Merrill, chief of cardiothoracic surgery at the University of Cincinnati College of Medicine.