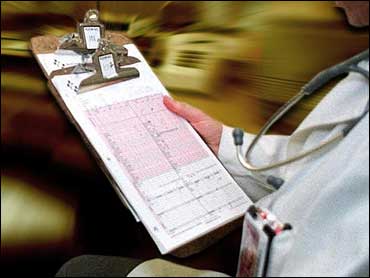 Five of the nation's largest employers plan to soon give their workers a unique health care benefit - their very own electronic medical record that they can take when they travel, change jobs or see a new doctor.

About 2.5 million workers and their dependents would have access to their health records through their computer. The records will be compiled by an independent, nonprofit organization. The information will be stored in a database that only the employee is supposed to be able to access.

The companies hope that cutting out the paperwork in health care would reduce administrative costs, duplicative care and medical errors.

In turn, the potential savings would make it easier for employers to continue sponsoring health care insurance for their workers. Barrett said those costs are making it harder for U.S. companies to compete.

"Our health care costs are much higher than anywhere else in the world," he said.

Officials say that the Omnimedix Institute of Portland, Ore., will maintain the health records. Omnimedix will gather the information from insurers, pharmacies, doctors and other health care providers. Patients will be able to update the record as well, with such things as their family's history of illness.

The companies do not say how much the program will cost. But they do stress that the records will be out of their hands.

"The companies don't have access or control over the database," Barrett said.

President Bush has set a goal that all Americans have electronic health records by 2014. But there is disagreement on how to make that happen. This year, Congress could not agree on legislation that would speed up the use of electronic record keeping.

Part of the disagreement is on the role the government should play in paying for electronic health records. Corporations are anxious to see that adoption occur, said Linda Dillman, an executive vice president at Wal-Mart.

"We felt we could be an employer, a business that's playing a leading role in activating others. We think business can make the change happen faster than it's happening today," said Linda Dillman, an executive vice president at Wal-Mart.

The list of businesses funding the database is expected to grow to 10 in coming months. The companies did not say how much money they will spend on the program. An Intel spokesman said the costs would not be released. The records should be available in about six months.