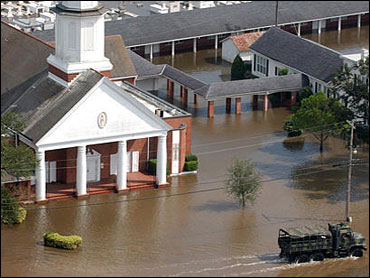 For the storm-battered Gulf Coast, the images were all too familiar: Tiny fishing villages in splinters, refrigerators and coffins bobbing in floodwaters, helicopters and rescue boats making house-to-house searches of residents stranded on the rooftops.

Yet as the misery wrought by Hurricane Rita came into clearer view — particularly in the marshy towns along the Texas-Louisiana line — officials credited the epic evacuation of 3 million people for saving countless lives.

Millions who left Houston and other areas are now coming back, reports CBS News correspondent Steve Futterman. Officials are hoping people come back in stages over three days, but there's no indication if people are following that plan. Sunday there were traffic jams on many highways leading to Houston.

In other cities harder hit, like Port Arthur, there was no indication when people will be allowed back.

"We've got a long haul yet. I don't see any light for a while. I think we are going to have another few dark nights in Port Arthur," said Mayor Oscar Ortiz.

Power in Port Arthur could be out for up to a month.

When Hurricane Rita roared into Cameron, La., almost none of the Parish's 2,000 residents were home: They had evacuated, and that was good, reports CBS News correspondent Randall Pinkston, "because Rita kicked the door down and trashed almost everything standing — homes, businesses, schools. Almost everything was smashed to little more than matchsticks."

But authorities Sunday had trouble keeping people from traveling through floodwaters in southern Louisiana in their boats to discover whether Rita had wrecked their homes and livelihoods.

"I've been through quite a few of them, and we've never had water like this," said L.E. Nix, whose home on the edge of a bayou in Louisiana's Calcasieu Parish was swamped with 3 feet of water. "I had a little piece of paradise, and now I guess it's gone."

In Houston, which was spared the brunt of Rita, officials set up a voluntary, staggered plan for an "orderly migration" with different areas going home Sunday, Monday and Tuesday to avoid the massive gridlock that accompanied the exodus out.

By Sunday night, a seemingly endless stream of charter buses, cars and sport utility vehicles clogged the southbound lanes of Interstate 45 into Houston.

But one problem, reports CBS News correspondent Peter King (audio), is that few businesses are open to support the returning residents.

Coming on the heels of Hurricane Katrina, where many chose to ride out the storm with deadly consequences, the news coming from the aftermath of Rita was for the most part positive.