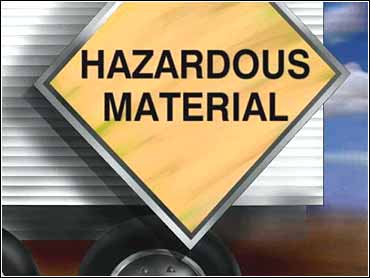 On highways across the United States, the police are checking thousands of vehicles carrying such hazardous materials as gasoline, explosives, and chemicals. All licenses with what are called "haz-mat" endorsements are being verified.

The alert was issued after the FBI in Pittsburgh charged 20 Arab Americans with buying fake licenses to transport hazardous materials. Was this a new bomb plot with chemicals or a simple scam for the drivers to inflate their resumes?

The FBI admits none of the 18 men arrested is connected to the terrorists. At the same time, the bureau believes it had no choice but to issue this alert. "We are looking at individuals who have obtained haz-mat licenses and particularly those individuals who may have obtained them under suspicious circumstances," said FBI Chief Robert Mueller.

The nationwide security dragnet involves more than 50,000 trucking companies carrying everything from chemicals used to make soap to gasoline and fertilizer, as well as a review of 2.5 million commercial driver's licenses.

On any given day as many as 76,000 tanker trucks with millions of pounds of hazardous cargo traverse the nation, according to industry estimates. For many of these products, release in a crowded area could be deadly.

"Everything is being looked at a lot harder," said John Conley, vice president of the National Tank Truck Carriers, which represents 200 companies that haul some of the most dangerous cargo, including poisonous chemicals and gases as well as highly flammable fuels.

While most truck drivers are taking these inspections in stride, most experts in terrorism think the actual threat of a bio-chemical truck attack is low. "Past history has shown that conventional explosives do plenty of damage on their own," explained chemical and biological warfare expert Eric Croddy.

Croddy points out the 1993 Trade Center bombers used a conventional truck bomb, simply because that was easier then chemicals or biologics.

"Due to technical hurdles and other complications with these types of weapons -- namely biological but also chemical warfare agents -- this complicates the picture on the operational level for the terrorists," he said.

The roadside inspections will, in most cases, be limited to checks on driver's licenses and background. Many of the checks will be conducted by safety inspectors as well as highway patrol, officials said.

Paul Bomgardner, director of hazardous material transportation at the American Trucking Associations, said it's virtually impossible to check every truck. "If you tried to stop every truck you'd have backups for miles," said Bomgardner, who once worked as a state truck safety inspector in Maryland.